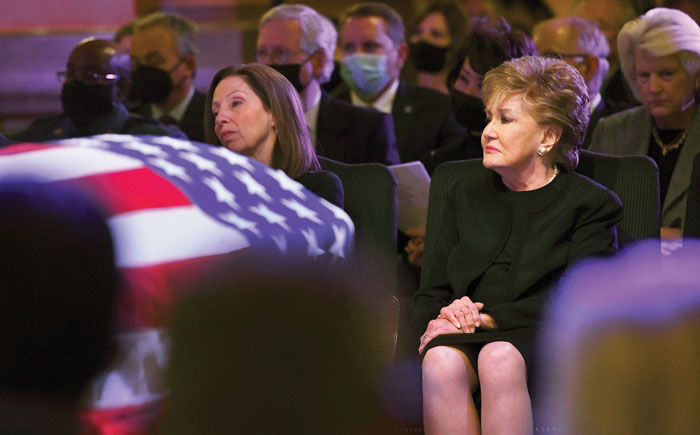 Salisbury’s Margaret Kluttz and her daughter, Meg Dees, were among 1,200 invited guests for the funeral of Sen. Bob Dole on Dec. 10 at the National Cathedral in Washington, D.C.

Dees says it was the most powerful experience of her life.

The two have been longtime friends of Dole and his wife, Salisbury native Sen. Elizabeth Hanford Dole. The Hanford home and the Kluttz home are only two blocks apart on Fulton Street, so generations of the families have known one another for years.

Dees served as an intern in Dole’s office when she was 17. She worked during January term at her high school, and attended the inauguration of President George H.W. Bush.

“I was always very close to Mrs. Hanford,” Dees says. Mary Cathey Hanford, the mother of Elizabeth Dole, died in 2004 at 102.

Kluttz first met Dole when Elizabeth Dole brought him to Salisbury in 1975. Jim and Mary Anne Woodson hosted a party for the couple, who were married later that year.

“He was so good looking and tan,” Kluttz remembers. “Everyone was starstruck. And she was beautiful. She was a homegrown success story. Everybody thought they were rock stars together.”

The families visited either in Salisbury or Washington over the years, Kluttz recalls. “Before we got home they’d written us a thank you note.”

Last week, Kluttz and Dees arrived in Washington the day before the service and went immediately to the Capitol to pay their respects.

“That was a really sacred, powerful moment for both of us,” Dees says.

“It was very quiet and very moving,” Kluttz says. “Meg got to see the offices where she served. Sen. McConnell’s and Sen. Pelosi’s staffs were working together that day. That was very intentional. Bob’s life was not about burning bridges but building them.”

Mother and daughter watched the sunset that evening over the Capitol.

“It was gorgeous,” Dees says. “All flags were at half-mast. It was very powerful. It was his final gift to us.”

The next morning, the duo arrived at the National Cathedral by 9 a.m. for the 11 a.m., invitation-only service. They were seated in the fourth row behind Sen. Elizabeth Dole.

Tom Hanks, who chaired the Hidden Heroes campaign for the Elizabeth Dole Foundation, sat just behind Sen. Elizabeth Dole and spoke at the wreath laying following the service at the World War II memorial.

Kluttz admired how the actor helped Sen. Elizabeth Dole during the service.

“They are devoted friends,” she says. “It was very dear how he tended to her.”

Kluttz and Dees admitted to be starstruck when they first arrived, but then they realized that everyone in the room was there out of found respect for the Doles.

“He was an American first and a Republican second,” Kluttz says.

“You went from being starstruck to realizing why you were there,” Dees adds.

In attendance were politicians, religious leaders, celebrities, family and friends, staff members, the Doles’ caregivers and military caregivers who came on behalf of the Elizabeth Dole Foundation.

Kluttz was seated beside Sen. Tom Daschle, a Democrat who served as Senate majority leader from 2001 to 2003. He was one of the speakers, along with President Joe Biden, Pat Roberts, and Robin Dole, Dole’s daughter.

Daschle and Pat Roberts gave tributes. Roberts is a Republican senator from Kansas who served from 1997 to 2021.

The night Daschle lost his last election, the first call he received was from Dole, Kluttz says. “They were collegial. They loved one another and respected one another. They never let their egos mar their friendship.”

Kluttz was pleased that Dole’s daughter had a role in the service.

“She and her father had an incredible relationship,” Kluttz says. “It was great to see that personal touch.”

Following the two-hour service, Kluttz rode in the motorcade from the cathedral to the wreath laying.

Savannah Guthrie of the Today Show, a close friend of the Doles, presided over the 30-minute ceremony and introduced the two other speakers, Hanks and Gen. Mark Milley, chairman of the joint chiefs.

Dole was instrumental in the completion of the memorial, Hanks said in his remarks there.

“How many structures in this city exist but for the efforts of one man?” Hanks said. “The National World War II Memorial was built over two White House Administrations with the contributions of Americans like you. But it was Bob Dole who willed this memorial into place. He pushed the idea, he corralled the votes, he made the phone calls, he enlisted allies — all of us in the cause — and he raised the money. He did all but mix the concrete himself, which he may have done had he had the use of that right arm.”

This, too, was a meaningful service for attendees.

“The sun just beamed through at the World War II memorial,” Kluttz says. “It was God’s last little blessing on Bob Dole.”

After the funeral in Washington, Dole’s body was taken to Russell, Kansas, for a memorial service Dec. 11. He lay in repose at the State Capitol. He will be buried at Arlington Cemetery at a later date.

The last time that Dees saw Dole was at lunch in Washington in October 2019.

“He was 96, and he worked that room like nobody I’ve ever seen,” she says. “I’m still processing his service, but it truly was one of the most meaningful things I’ve ever done in my life.”