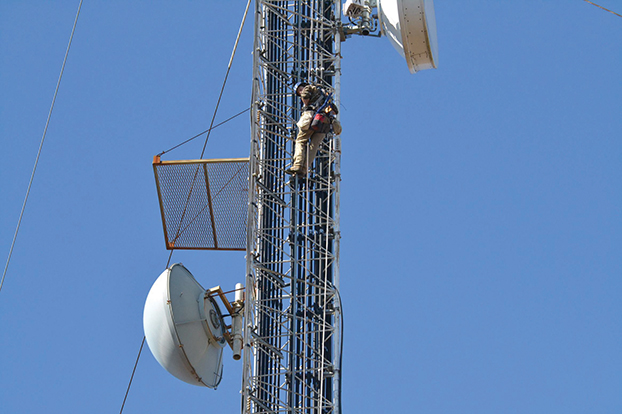 A climber makes his way up a tower in western Rowan County to install equipment used by Open Broadband to provide high speed internet to customers. Photo submitted.

SALISBURY — With a tower in western Rowan County outfitted with antennas now in operation, Open Broadband has started testing its internet service with a handful of customers.

The internet provider’s expansion into Rowan County has been in the works for over a year and was incentivized by county government, which made it a priority to bring broadband to rural areas that have had to rely on slow, outdated internet service or have gone without. The county elected to distribute $150,000 in both county funds and money from the Coronavirus Aid, Relief and Economic Security Act to Open Broadband. The company is using $100,000 of its own to complete the buildout.

Open Broadband, based in Waxhaw, has focused on bringing its product to communities in the northwest and southeast parts of the county, which were identified as areas of need by a task force assembled in 2018.

In order to deliver broadband to large swaths of open area, Open Broadband employs a method called fixed-wireless to transmit radio signal via antennas from towers directly to a receiver on a customer’s home. To cover the western part of the county, Open Broadband has installed equipment on one of the pre-existing radio towers on Young’s Mountain, near Cleveland.

“That tower is so high, it covers all of western and northwestern Rowan County,” Winrich said.

Winrich said the primary goal was to reach the Scotch-Irish township area, but being able to cover most of the western half of the county is “icing on the cake.”

To cover the southeastern part of the county, Open Broadband is currently working to link internet service to a cell tower in Rockwell that extends about 300 feet into the sky. Open Broadband will pay the owner of the tower a monthly fee for taking up tower real estate with its equipment.

Open Broadband will first provide service to customers who are within the line-of-sight of the towers, which means the radio signals can be transmitted directly to the homes.

“If you can see the tower, it’s great service,” Winrich said.

For those who are not within sight of a tower, the company is working to provide an alternate method of internet delivery that relies on reflecting signals off of trees, buildings or other objects. Winrich said those methods should allow the company to offer services to most customers, but it may be tricky reaching people who live in valley-like areas. The speeds provided by the non-line-of-sight method should be comparable, Winrich said.

Open Broadband expects to provide customers with speeds around 100 megabits per second. Winrich said the speed should be symmetrical, meaning that upload and download speeds are about the same.

Rowan County customers will be able to choose one of three internet packages, which ranges in price from $49.99 to $84.99, depending on the megabits per second. There is also a $150 installation fee. Winrich said the installation time varies based on the home, but is usually between one and two hours.

Winrich said the company plans on installing internet for customers in both western and southeastern Rowan County in the near future. Customers have joined a waitlist for service. The company also has designs to install more towers in the “not-too-distant future.”

More information about Open Broadband’s services in Rowan County can be found online at openbb.net/rowanco or by calling 980-246-8989.