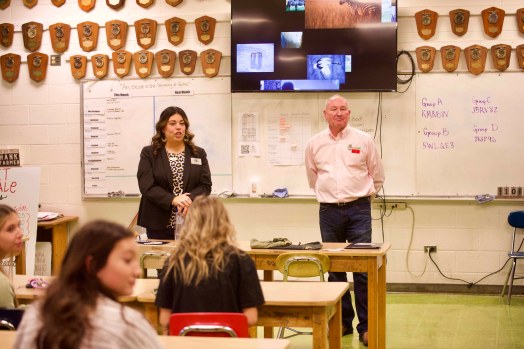 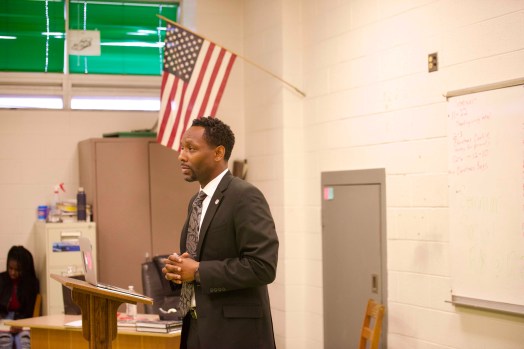 CHINA GROVE – Paying taxes, taking advantage of home equity and what to bring when you move out of your parents’ house are a mystery for many high school students, so South Rowan High School decided to show seniors the ropes.

On Friday, the school hosted its first Learning it From Experts, or LIFE, conference to fill in some of the blanks students may have as they prepare to go on to work or further education after high school. The event was organized because of feedback from students.

“You hear it a lot, ‘I need to know more about paying my taxes, I don’t understand all the things about car insurance or homeowners’ insurance or ‘what’s a deductible,’ ” marketing teaching and work-based learning facilitator Tammy Tutterow said. “We kind of took some of those hot topics that kids want to learn more about and we pulled in some experts.”

Students were free to sign up for any of eight sessions and ate lunch together as well.

There were sessions about going to work after high school, preparing to go to college, filing taxes, applying for financial aid and scholarships, community resources, filing taxes, banking and insurance.

Frankie Caraccio, a 2018 South Rowan graduate, talked to students about moving out of their parents’ house. He said he was attending community college and planning to transfer to the University of North Carolina at Chapel Hill to pursue a business degree, but when the COVID-19 pandemic began he was not convinced remote learning was worth his time and money.

So he improvised. He started working on an asphalt crew, and he found he liked construction. He learned how to operate equipment as well and was making a good living. Now he works with another contractor and he moved out on his own when he was 20.

He talked to the students about the reality of paying their own bills, their first grocery store visit and things they might forget like food containers to save their leftovers.

“Having good credit, having good organizational skills with your finances, putting that money into things that are worth more than going out to eat every day,” Caraccio said.

He spoke to the students about his experience living with his parents and resisting the urge to spend all the money they take home in a check.

JROTC and driver’s education instructor Dean Mullinax spoke to students about everything they will need to get their driving licenses, including what to do if they get it after they turn 18. He talked about the documentation they will need and also walked them getting critical documents like social security cards replaced. State Farm agent Cristina Cook spoke about having insurance that’s needed to get on the road.

F&M Bank training officer Nick Means talked to the kids about the basics of banking like home equity, collateral and how those concepts impact people who are trying to borrow money.

Student Alex Fike said the talk on filing tax returns was straightforward, but now he knows what to do and he may have to file for the first time next year. During the banking session he got a better understanding of credit.

“I thought about it as in loans, but he went really in-depth and explained the parts you need to know to advance your credit,” Fike said.

Weston Carpenter said the talk on going to college filled him in on the basic life skills needed to get by.

Carpenter said the sessions gave them all a basic understanding of what to expect after high school.