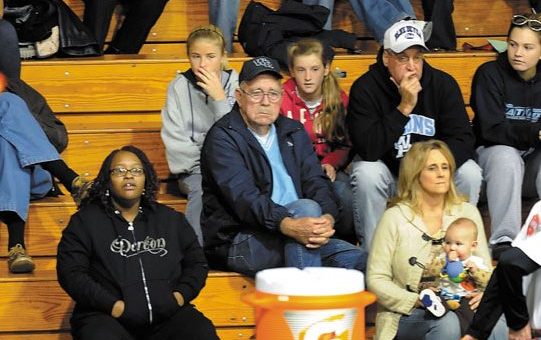 Well, sort of playing. He was redshirting, which meant he wouldn’t be seeing any game action that season.

It was a snowy road game at Mars Hill, more than two hours from the Gurley household, so when Robert Withers “Bob” Gurley casually strolled into the gym, his son couldn’t have been more stunned than if Santa Claus had just come down the chimney.

“Dad, you do realize I’m not playing?” Mike said.

“Yes, I understand what redshirt means,” his father replied.

“So you drove two hours for nothing,” Mike said.

“Just felt like watching a basketball game,” Bob said. “Anything wrong with that?”

It was one of those rare times when Mike was rendered speechless.

There was a whole lot right about Bob showing up that bleak night at Mars Hill.

Redshirt seasons are lonely and tough and they can be discouraging for former high school standouts. Bob knew his son needed support. Showing up just to say hello and watch Mike go through warmups was the best way he knew to let him know at least one person was still in his corner.

There was the night Bob showed up in Pikeville, Ky., 255 miles from home, to support Belmont Abbey against a Pikeville phenom named Todd May, who scored more than 2,000 career points.

There also was the night Bob showed up at Methodist College in Fayetteville. Belmont Abbey assistant coach Gregg Marshall decided the best way to get home — there is no great way to get  home from Fayetteville — was to follow the Gurleys.

“My dad heads north toward Asheboro, and after about three miles, Coach Marshall gets our attention, everyone stop and pulls over, and he informs my dad we’re going the wrong way,” Gurley remembers. “My dad tells him he knows where he’s going, but they can go in any direction they darn well please. Well, we get home. I showered. I ate. I’m sitting around watching TV, and those guys with Coach Marshall still haven’t make it back. My dad didn’t forget. We’re watching the NCAA Tournament one night, and there’s Gregg Marshall coaching Wichita State, one of the nation’s top teams, and my dad is laughing his head off, because that’s the guy who couldn’t find his way back from Fayetteville.”

Bob Gurley passed away on Sept. 1., a few months before Mike started his 30th season as a varsity head coach and his 25th at the helm of the West Rowan Falcons.

An electrician and volunteer fireman and a sports nut devoted to the New York Yankees, Dallas Cowboys, Duke Blue Devils and West Rowan, Bob was 87.

He took a seat behind the West Rowan bench, and West basketball has never experienced a more loyal supporter.

“He wasn’t seeing well, so he’d stopped making all the trips a few years ago, although he still wanted to hear about every game, talk about every game and rehash every game,” Coach Gurley said. “For 22 years he didn’t miss a West scrimmage or a game, and he was at my games coaching Lexington for five years before that. Everyone knew him as ‘Mr. Gurley’ or ‘Coach Gurley’s dad.’ I’m incredibly biased, but I think he knew more than anyone. He knew everything about every team because he’d get the Salisbury Post, he’d get the Charlotte Observer, and he’d even get the Cabarrus and the Iredell papers. He’d talk to the bus drivers. He’d talk to our players. He’d talk to opposing players and to opposing coaches.”

There were in-game conversations between the Gurleys that were audible for a portion of the gym.

“Are your guys ever gonna make a shot?” Bob might ask.  “Hey, you might want to tell your guys to get a rebound.”

“Thanks, Dad,” the coach would respond. “Appreciate all the great advice!”

But after the games, especially after tough losses, Bob invariably would have the perfect words in the hallway or the coaches’ office.

“If we got beat, my dad would tell me he still loved me and he was proud of me,” Gurley said. “And if we were really playing well, if I was getting a little cocky, he knew exactly how to pop the balloon. He was a great listener, with that special radar that dads seem to have, and he always knew the right thing to say to me. He relaxed me. Just seeing him in the crowd, behind our bench, yelling for our guys, relaxed me.”

Coach Gurley is animated when he coaches. He stomps and he hops and he makes wild gestures. He always worried that he might send the championship ring that he wears flying into the stands or across the floor, so his dad held the ring during the games. That ring was a bond, something that tied them together during  a ballgame. And when the heat of battle was over, Bob would hand the ring back to his son.

Bob Gurley’s most important service to his son came when Mike was still in high school at North Mecklenburg, playing for a legendary coach — Leroy Holden.

Gurley had his ups and downs at North Meck, especially early in his career.

Benched for a while, he came home and bitterly complained to his father. He wanted his father to let Coach Holden know he was making a terrible error in judgment.

Mike Gurley successfully made his way in the hoops world, as a player and then as a Hall of Fame coach.

He won 102 games and a state title at Lexington. He’s won 442 games and two state championships at West Rowan.

In August 2019, Bob got to watch his son be inducted into the Salisbury-Rowan Hall of Fame.

When Bob passed away, there was a flurry of calls from all over.  One call to Mike came from Scooter Sherrill, the biggest superstar of the Gurley era at West, but calls also came from the benchwarmers. Falcons were Falcons. Bob always had an encouraging word for every player, before and after the games, and that was the case win or lose.

When Gurley took the coaching reins at West, he was the young bear in the county and several old-school coaches were still around.

He misses the struggles with South’s Bobby Parker, North’s Bob Hundley and Salisbury’s Sam Gealy more than he can say.

Longtime adversaries such as A.L. Brown’s Shelwyn Klutz and Davie’s Mike Absher have stepped down now, but Gurley, mellower than the old days but still a coach with a passion for the game, keeps grinding.

Now for the first time in his career, he’s coaching a basketball season without the calming counsel of his best friend.

“I do miss my dad,” Gurley said. “I miss him at night. I miss being able to call him to talk about the game.”