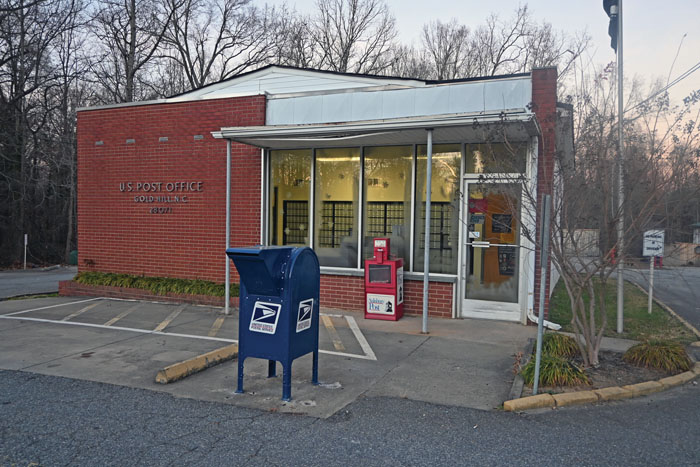 Natalie Anderson/Salisbury Post — Gold Hill residents say the local post office on Highway 52 has closed unannounced in recent weeks and was closed for a full week without an employee providing services.

GOLD HILL — Residents of southeastern Rowan County report making multiple trips to the local post office only to find it closed without notification and, in one instance, closed for a full week without an employee providing services.

Gold Hill resident Jessica Rose said she and her husband are new to the area and needed a P.O. box a few weeks ago. She stopped by the post office three times before someone was present and able to speak with her. Rose said she was told the office, located at 14125 U.S. 52, was not staffed when the clerk was on vacation for a week, though there was an expectation the office would remain open and staffed at least for part of the day throughout the week.

“This is the first time I’ve ever seen this,” Rose said. “There is just a complete lack of organization and communication.”

Other times, the post office closes without notification, residents say. Vivian Hopkins, vice president of the Historic Gold Hill and Mines Foundation and an unofficial Gold Hill ambassador, said she was at the post office when a clerk received a call instructing her to close the Gold Hill site because she was needed elsewhere. Hopkins said closure of the post office has been an ongoing issue since the site’s longtime, full-time clerk retired this summer.

“I’m seeing these issues occurring more often than they need to,” Hopkins said. “We have a lot of people that depend on that post office.”

Apryle Humphrey, who works at Gold Hill Market and Grill next door, said she’s received calls nearly every day for about a month with people asking whether the post office was open. In one instance, Humphrey said, she watched an older couple sit in their car almost all day waiting for it to open.

Hopkins said residents “have really fought” to keep the post office open because it also puts the area on the map when tourists are traveling to the area. It’s the landmark Hopkins uses when people can’t find Gold Hill and need to plug an address into a GPS system or maps application.

After the Post contacted Rowan County Postmaster Rodrick Cole this week about problems, another representative of the U.S. Postal Service returned the request on his behalf. The person did not respond to the Post’s questions about how concerns are being addressed and mitigated.

Gold Hill resident Sharon Easton-Lomax told the Post she works the third shift at her job and has limited availability to make a visit to the post office when needed. She recalls stopping by the post office only to find it closed before 4 p.m. on multiple occasions.

“There are only certain times I can make it,” Easton-Lomax said.

In East Spencer, former Salisbury City Councilman Kenny Hardin in working to initiate a federal audit of the East Spencer Post Office after fielding similar complaints from residents. Complaints there range from a lack of response from postmaster Cole, frequent closures of the office without notice, the inability to purchase money orders, “guesstimated” rates for postage and lack of proper cleaning.

On Nov. 10, Cole attended an East Spencer town board meeting and addressed rumors that the East Spencer site would close. He attributed inconsistent hours to a major staffing shortage further exacerbated by the holiday season. Cole said he sometimes has to decide which branch will be open and operational and that it is often Salisbury’s location due to the higher traffic.

Rose said it’s worth asking if employees are being paid enough so that closures aren’t necessary if there is a staffing or recruitment issue.

“This is one of the basic services we have,” Rose said. “It’s one of the very basic things Americans enjoy because we pay taxes. It shouldn’t be consisted a profit-making business. It’s a service that we need.”