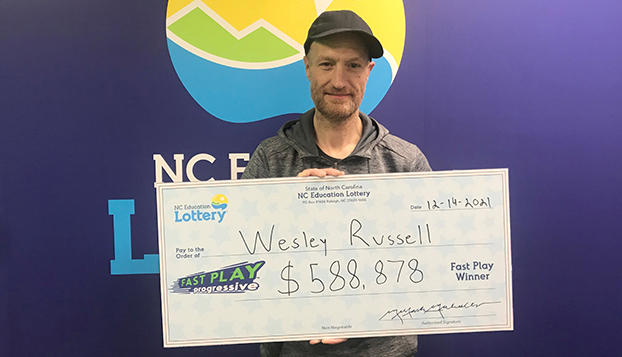 KANNAPOLIS — Wesley Russell of Kannapolis says he wants to buy a new house for his parents after a $20 Fast Play lottery ticket turned into a $588,878 win.

“My parents are the only people who have always stood by my side,” Russell said in a news release from the N.C. Lottery. “I learned how to be a good person from them and it’s time to pay them back.”

“I didn’t believe it so I showed the guy at the register and then he started freaking out too,” Russell said. “I thought I was being punked or something.”

Russell purchased his lucky $20 Jackpot 7’s ticket on Monday from the Speedway on South Cannon Boulevard in Kannapolis. He wasn’t initially planning to buy a ticket when he stopped at the store.

“For some reason I really was feeling super lucky and something was telling me to buy that ticket,” Russell said. “I think I’m still dreaming.”

Russell said the win came at a perfect time because he has a baby on the way in January.

Russell arrived at lottery headquarters on Tuesday to collect his prize. After required federal and state tax withholdings, he took home $416,637.

Fast Play’s rolling, progressive jackpot increases with every ticket sold until it is won. Players can see if they have won and how much instantly on their tickets. The odds of winning a Fast Play jackpot are 1 in 240,000.