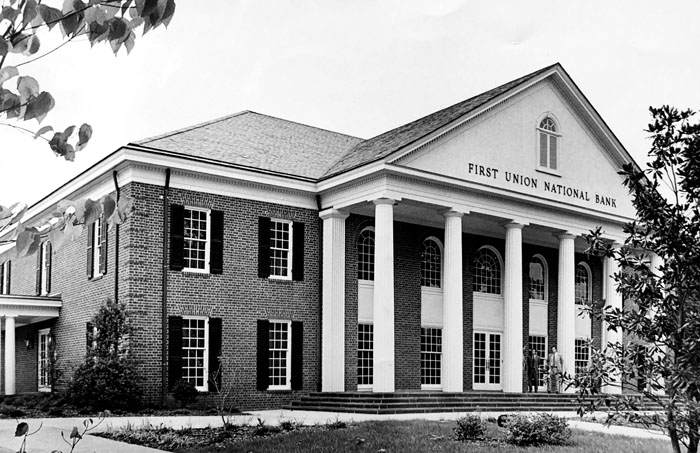 SALISBURY — Shae Mills recalls short trips in the 1970s with her coworkers at First Union National Bank to Purcell’s Drug Store in downtown Salisbury for cherry limeades and orangeades.

Their “greasy spoon” choice was Bill’s Pastry near the O.O. Rufty’s General Store. Denny’s was just down the road, and so was a Winn-Dixie grocery store. The county administration building on West Innes Street was a post office.

Now,  the Bell Tower — formerly a fixture of First Presbyterian Church — is the block’s remaining landmark from an era when banks were community hubs because everyone had to make a visit. That was long before ATMs, credit cards and direct deposits from smartphones.

“It’s just hard to imagine not seeing the bank building,” Mills said. “But I think they’ve done a great job.”

Mills joined her former colleagues Toni Megliorino, Kay Roberts Linker and Pat Goodnight at Bell Tower Green Park on Tuesday to reminisce about their time banking where the park now stands. In 2017, the 6,200-square-foot bank building built in 1973 was demolished.

All four women worked at First Union Bank together for some time. Despite moves across the country and career shifts, the four have kept in touch along the way. 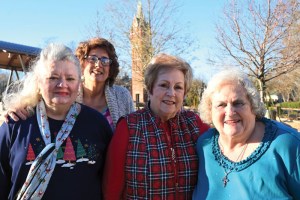 Megliorino, known as Toni Hege at the time, was a senior teller when First Union Bank in the early 1970s decided to move its location from South Main Street to the current site of the park. She joined First Union right out of high school in 1968 and began upstairs in bookkeeping at a time when everything was handled manually.

She would eventually lead the bank’s efforts to help set skeptical merchants up with Mastercard credit cards.

“I can remember when direct deposit first started for Social Security checks,” Megliorino said. “But a lot of the senior citizens didn’t believe in that. They still wanted to get that paper check. They still wanted to come and stand in a line to do their banking business. On the third of the month, you’d have lines of people.”

The customers were the primary reason the four say they enjoyed banking. While at the South Main Street location, Megliorino recalls a regular customer who became a favorite: former actor Sidney Blackmer, known for the 1968 film “Rosemary’s Baby” and others. Blackmer would often bring along his corgi and his son, Jonathan, when visiting the bank.

“He was so nice and polite,” Megliorino said. “And most of the time, I was the only one he’d let wait on him so he’d have to stand in my line.”

Megliorino left First Union a decade later before moving to Texas, where she would eventually make a career shift into law enforcement. Megliorino said she was once robbed at gunpoint while working at a bank in Texas.

“At that time, I decided that scared me so bad to have that gun in my face, somebody standing there demanding the money,” Megliorino said. “I made a promise ‘I’m not going to be scared like this anymore.’ ”

She moved back to Salisbury in 1984 and joined the Salisbury Police Department for a few years before finishing out a nearly two-decade tenure with the Rowan County Sheriff’s Office.

Linker, who was known as Kay Roberts at the time, also began her career in banking before shifting to law enforcement. Linker started at First Union in 1975 working with consumer loans. Before leaving in 1981, she’d serve as the customer service representative and head teller.

“It’s like I still see that bank as a shining example of beautiful architecture,” Linker said. “I miss it to this day. That building was magnificent.”

Her husband, brother-in-law and father-in-law, who all worked in law enforcement, inspired her to join the Kannapolis Police Department as a detective. She worked major crimes such as homicide, child sexual abuse, white collar crimes, and, ironically, bank robberies.

“I think it’s funny that I worked in a bank and I had all that working knowledge, and then I went in law enforcement and I worked bank robberies,” Linker said. “I would clear those bank robberies and I could tell y’all some stories that would make hair stand up.”

Mills, who now lives in Monroe, remembers moving to Salisbury from Pennsylvania while working in the dental industry. She made a career shift to begin banking with First Union when its building was located at 117 South Main St., where local attorney Mary Beth Smith’s office is now. Megliorino trained Mills before Mills worked a few stints at other banking organizations in China Grove and Charlotte. She worked in every department and recalls the challenge of encouraging customers to use the newly installed ATM, which needed thousands of transactions before it would become profitable.

“When they put the first ATM machine in, I stood out front with a dummy card that would work and trained people to show them how to use the ATM,” Mills said.

Likewise, not everyone was a fan of the drive-thru option for banking, Mills said.

“Even people our age still won’t use a PC or a cellphone,” she added. “They still go to the bank.”

Goodnight is one of those people who just “wants to be there” in person. Goodnight began her banking career at Scottish Bank, which preceded First Union Bank at its South Main Street location. She worked for First Union on and off for a decade before spending two at the local VA hospital. Jeanie Eller, the first woman to serve as vice president of the bank, was her trainer.

Phyllis Freeze, who worked alongside Eller at the bank for more than 20 years, was another former coworker invited Tuesday along with George Kluttz. Megliorino said neither could make it for the meet-up Tuesday.

Megliorino said she helped design the teller area of the new bank building. When the building was demolished in 2017 to make room for Bell Tower Green Park, she obtained pieces of the blue slate flagstone that lined the flooring of the covered entrance.

“I’ve got it in my front garden so now I think about First Union everyday when I go outside,” Megliorino said.

Mills was the only one who had not yet seen the park Tuesday. All say they’re excited to see it during concert performances and events in the summer.