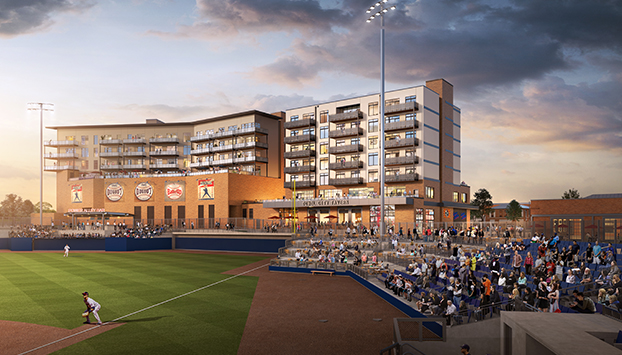 This rendering shows what the Stadium Lofts project on West Avenue in Kannapolis is expected to look like.

KANNAPOLIS — The next major step in the city’s downtown redevelopment will be a seven-story, mixed-use project called “Stadium Lofts,” city officials and developers announced Tuesday.

Temerity Capital Partners and the Lansing Melbourne Group will purchase a block on West Avenue adjacent to Atrium Health Ballpark, home of the Minor League Kannapolis Cannon Ballers, and invest $8.5 million. Temerity Capital Partners own the Cannon Ballers. The Lansing Melbourne Group is a Florida-based company that built the mixed-used development known as VIDA.

Steve Steinbacher of Cabarrus Brewing Company described the tavern as being “an immersive dining and drinking experience.”

“As soon as you reach this area of the ballpark, you will smell the smoky wood fire barbecue and the yeast of the beer all while listening and watching the sounds of the ballgame,” Steinbacher said. “Our name, Towel City Tavern, pays homage to the history of the city while celebrating all that is the best of the new revitalized Kannapolis.”

The project will also be the new permanent home of the Kannapolis Cannon Ballers team offices, the team store and the team ticket office. Currently, the team’s operations are in three different locations. The consolidation of operations will enable staff to be centralized and more efficient in a location closer to the ballpark, a news release said.

Stadium Lofts will include one- and two-bedroom residential apartments featuring high-end appliances and finishes. Each one will have its own patio overlooking the ballpark or the West Avenue’s streetscape. The building also will have a fitness center and other amenities.

“Once again we are very pleased to be working with Temerity Capital Partners and the Lansing Melbourne Group. From the start of our revitalization project, they have stepped in and been great partners with the city,” said Kannapolis Mayor Darrell Hinnant. “Their belief in Kannapolis has resulted in millions of dollars in private investment, hundreds of new jobs, thousands of people visiting our city and a baseball team that played in front of sold-out crowds in their inaugural season. We look forward to this new development which will spark even more enthusiasm and economic development in Kannapolis.”

Kent Gregory of Lansing Melbourne Group said the company has added more than 30 tenants and 330 jobs to the West Avenue district. Stadium Lofts will continue an “aggressive revitalization,” Gregory said.

Temerity Capital Partners CEO Andy Sandler said the company is exciting to be “delivering on a promise we made to the city of Kannapolis when we bought the baseball team.”

“This building will give Cannon Ballers fans even more to look forward to on game days and every other day of the year, and we’re excited to offer residents one more reason to come downtown,” Sandler said. “We also expect to announce two additional stadium-adjacent projects on West Avenue in the near future which will result in more retail, apartments and luxury condos. We applaud the vision of Mayor Hinnant and the City Council in building this magnificent stadium as a catalyst for the exciting redevelopment projects we are now seeing throughout Kannapolis.”