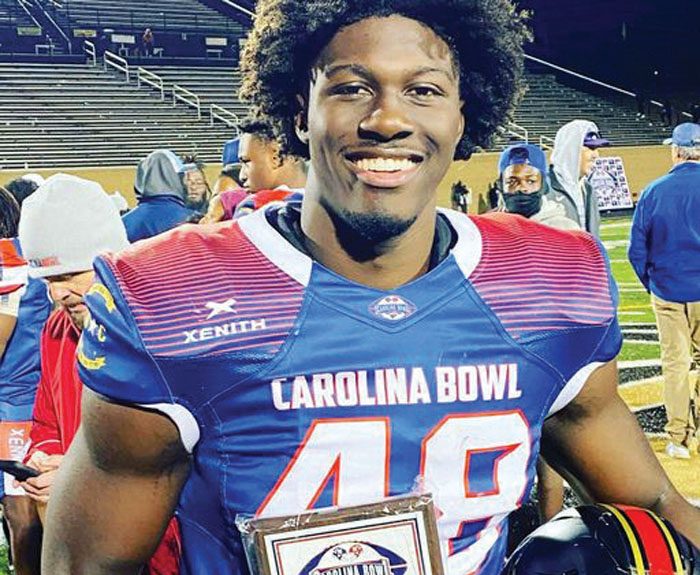 Despite graduating early, he didn’t spin the wheels of his car and shout out the windows as he exited the Salisbury High parking lot.

Instead, he quietly made his rounds up and down the hallways in his final hours.

It was close to a perfect high school experience in the classroom.

On the football field there was a state runner-up finish as a sophomore.

There was a state title as a junior.

There was a mind-blowing, record-breaking, one-loss senior season, albeit one that ended in the third round of the playoffs.

During his time at Salisbury, Walker became a state player of the year, a nationally celebrated phenom, a finalist for the nation’s best high school linebacker (still TBA) and a marquee Georgia recruit who recently welcomed Georgia head coach Kirby Smart into his family’s home as a dinner guest.

That game was Sunday.

When the Shrine Bowl of the Carolinas announced no Shrine game would be held for the second straight year because of coronavirus concerns, an alternative game was organized — the Carolina Senior Bowl Showcase — to be played in Gaffney, S.C. Work started on the game in October.

The North Carolina roster included, among others, Walker and West Rowan’s stud lineman Josh Noble, who is being recruited by a host of schools.

The North Carolina team practiced at Limestone University, a venue Walker has visited a number of times to support the Catawba Indians, the program that his father, Curtis, coaches.

The game was played at Gaffney High’s “Reservation,” an incredible high school stadium that has been the home field for 18 state champions.

The Carolina Senior Bowl Showcase was played on Sunday because the Touchstone Energy Cooperatives North-South All-Star Game, a South Carolina all-star game, was being played on Saturday in Myrtle Beach. There were college coaches who wanted to attend both games and there were South Carolina high school coaches (and fans) who had players in both games and wanted to support them all.

A lot of players who might have represented North Carolina were involved with state championship games on Saturday, but North Carolina still won big on the scoreboard — 34-7.

Not surprisingly, Walker was named defensive MVP for the North Carolina team. He had six tackles, including a sack.

“I knew my skills and my only goal for this game was to win it,” Walker said. “I played some outside linebacker, some inside linebacker and some defensive end, and I guess I did all right. The great state of North Carolina came together and we got the victory.”

Walker plans to enroll at Georgia on Jan. 5. Classes will start on Jan. 10.

He’ll be eligible to play in Georgia’s Red vs. Black Spring Game and will start his progression up the depth chart.

It won’t be a shock if there comes a day a few years down the road when he’s making the rounds in Athens, thanking administrators, coaches, classmates and teammates for the college experience, as he heads to dental school or the NFL.

NOTE: On Sunday, Jan. 2, Walker will play in the 2022 Under Armour All-America Game in Orlando.

That game will be televised at 2 p.m. on ESPN2.