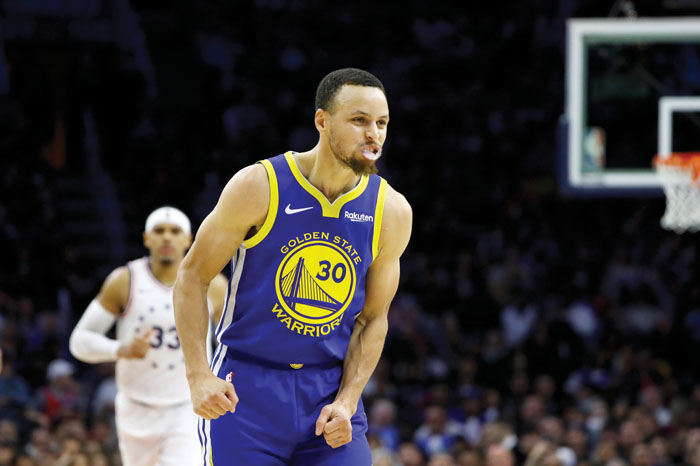 NEW YORK —   Stephen Curry would have loved to set the record for career 3-pointers in front of his Bay Area fans.

Doing it in front of his family and Ray Allen and Reggie Miller — guys who used to hold the record — and an adoring crowd at Madison Square Garden wasn’t bad, though.

“If you can’t do it at home, this is definitely a great Plan B,” Curry said Tuesday night.

Three of Curry’s 22 points gave him that title of NBA career leader for 3-pointers on a night the Golden State Warriors beat the New York Knicks 105-96.

Curry made his 2,974th 3-pointer with 7:33 left in the first quarter, followed by a lengthy celebration inside Madison Square Garden where he hugged his parents, teammates and Allen, whose record stood for 10 years.

“I thought the night was perfect,” said Warriors coach Steve Kerr, who called timeout after the record shot to make room for a celebration. “It just pretty much encapsulated who he is and his reaction to it was perfect.”

Curry’s record could last much longer, as he is taking and making 3s better than anyone in basketball. He came in averaging a career-high 5.4 per game and went 5 for 14 Tuesday, giving him a league-leading 145. Nobody else had made 100 entering play Tuesday.

Teammate Draymond Green, wearing a shirt with Curry on the front after the game, said the guard could end up beating the record by 1,000 or more.

“Steph is the best to ever shoot a basketball and we get the opportunity to go to work with him every day and it’s a very special thing,” Green said.

Curry, who set the record on the same Madison Square Garden court where he had a 54-point game in 2013 before becoming the NBA’s two-time MVP, has led the league in 3-pointers six times.

His team showed why it could make him a four-time champion with another lockdown defensive effort, limiting the Knicks to 36% shooting while improving the NBA’s best record to 23-5.

“You can see who they are,” Knicks coach Tom Thibodeau said.

Jordan Poole had 19 points and nine rebounds, going 13 for 13 on free throws to overcome a 3-for-11 night from the field. Green added eight points, 11 rebounds and seven assists.

Julius Randle scored 31 points for the Knicks, who have lost four straight and seven of eight. They were without RJ Barrett, Obi Toppin and Quentin Grimes because of the NBA’s health and safety protocols.

Curry and the Warriors weren’t particularly sharp, perhaps drained by the emotion of the early celebration or a delayed arrival in New York due to flight issues out of Indiana, where they played Monday night.

But they made sure the faltering Knicks couldn’t get anything going, gradually pulling away after a close first half.

By the time Curry made his last 3 of the night, Golden State went up 97-85 with about 2:40 to play and had seized control long before that.

The Warriors didn’t arrive in New York until early Tuesday afternoon. They remained in Indiana overnight because of plane troubles, and caught a bus from the hotel to the airport at 9:30 a.m. Teams usually arrive for a road game the night before.

“I told some of the coaches, it’s still better than the old days,” Kerr said. “My first few years, we flew commercial and this was like routine to have a back-to-back where you fly in on the day of the game. But you were on Continental, you weren’t on a charter, so it was a little bit harder back then.”

Warriors: Curry holds the Madison Square Garden record with 11 3-pointers in the 2013 game. … Andre Iguodala, who has battled right knee soreness, played for just the second time in 13 games. He had two points in 14 minutes.

Knicks: Derrick Rose scored 15 points. Alec Burks had 14 but shot 4 for 15. … The 2013 game was the last one the Knicks beat the Warriors at home. Golden State has won the last eight meetings.