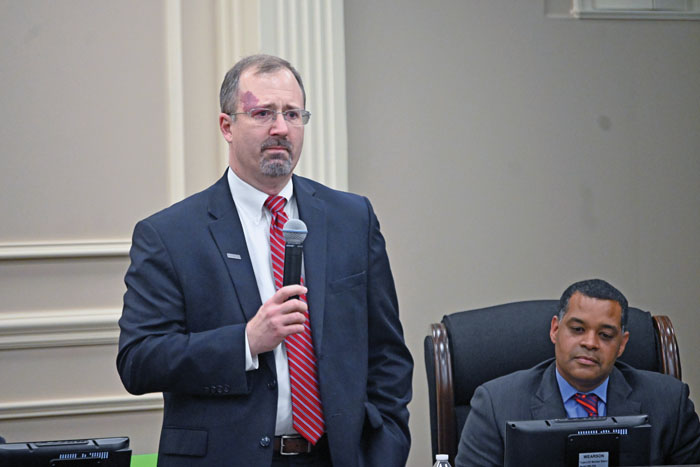 Natalie Anderson/Salisbury Post — An emotional Brian Miller speaks to a full council chamber Tuesday after being gifted with a resolution of appreciation, a key to the city and a watercolor painting of Bell Tower Green Park. Miller served on the Salisbury City Council for 12 years before his final meeting on Dec. 7.

Now looking back on his 12-year tenure with the council, Miller said he hopes he lived up to that.

Miller, who works for Truist Financial (formerly BB&T), participated in his last council meeting last week. It’s the first time since 1996, he said, where he hasn’t had the responsibility of sitting on a board or commission, teaching Sunday school or coaching Little League. For now, he plans to rest and unplug while he reconnects with what’s important to him and seeks other passions.

Before his first election to city council in 2009, Miller spent time on the Salisbury Planning Board, which he said is an ideal training ground for council members. During that time, he helped craft the city’s current Land Development Ordinance, which has made planning decisions much easier.

Miller’s entrance to and departure from the city council is marked by both the Great Recession in 2009 and the ongoing pandemic in 2021. During that time, Miller had a hand in a lot of major decisions, including the city’s fiber-optic network Fibrant, Bell Tower Green Park and the Empire Hotel redevelopment project, which is still ongoing.

Miller considers those the “high marks” of his tenure. While he gives the credit to City Manager Lane Bailey and council member David Post for addressing financial uncertainty around Fibrant, Empire Hotel kept him coming back each election cycle. Miller was part of the bank coalition that helped Downtown Salisbury Inc. purchase the hotel property, and now, he remains on DSI’s Empire Hotel Redevelopment Task Force that’s working with Charlotte-based developer Brett Kreuger to restore the space into a boutique hotel.

Miller said it’s hard to compare issues council members faced when he first began to the issues at hand today because “it’s a different world.”

“I’ve been in this market for 25-plus years and everybody keeps saying we’re the next wave out of Charlotte,” Miller said. “It may finally be coming.”

The 12 years on the council have helped Miller evolve both as a leader and as a person. He voiced some advice to council members last week during his last meeting, which he said speaks to his own approach in leadership and decision-making. Once upon a time, Miller would have been more resistant to council retreats and travels, feeling as if they weren’t an ideal use of the city’s resources. But his message to the council last week was to take the retreats and get to know each other before they have to make decisions together.

“I see why now after having served, would we have had better relationships in some of the previous councils I’ve been a part of if we had taken the time to get know one another? I think the answer is yes,” Miller said.

Additionally, though he already felt like a person open to differing perspectives, Miller says his time on council made him more open.

The “Fame” Confederate monument is one example. In 2020, Miller was one of the five council members who unanimously agreed to relocate the monument to a historic cemetery on North Lee Street after it was declared a public safety hazard in the height of protesting.

Before that vote, Miller said he didn’t initially interpret the statue in the way many others did. But his view evolved to believe the statue isn’t worth anyone’s life and it shouldn’t serve as a source of division in the city.

“Somewhere along the way, I realized that it’s not necessarily your perspective that matters,” Miller said. “It’s the fact that that other perspective exists. I said during council meetings that that statue isn’t worth one person’s life.”

He’s proud to be part of the council that made the decision to relocate it.

Miller said his approach ahead of each meeting was to come prepared to make a decision while remaining open to varying perspectives — because it means you did your homework and to keep the meetings moving along. If council members want to get something done, it’s best to find two other people who are on board because it’s all about reaching a consensus, politics aside, Miller said.

“I can tell you there were many, many times … where my initial gut ‘this is how I’m going to approach this’ was changed based on either testimony or comments from other council members,” Miller said. “And if you dig in, you’re going to miss that.”

If people find themselves as the council member in the minority of a vote, Miller said “move on” because there are many more issues to tackle.

Miller says he has high hopes for the new council, which includes Mayor Karen Alexander, Mayor Pro Tem Tamara Sheffield, Post and newcomers Anthony Smith and Harry McLaughlin Jr. Miller senses “a common desire to do well” and is confident they’re the kind of individuals who will work hard to work well together.

“This is important work,” Miller said.

The top priorities he sees for council include keeping ahead of flooding issues at the water supply pump station on the Yadkin River. Miller said there’s a promise of grant funding that would be a major win for the city. Additionally, residential development in the downtown area should be encouraged, and he anticipates available units doubling within the next five years based on projects in the pipeline, including the Empire Hotel and the Bell Block building.

Though he’s never found the best approach, Miller sees a need to repurpose more of the city’s aging housing stock across the city. The Community Development Corporation does that now, but Miller said an important question may be “how do we scale that?”

Miller recalled his tenure with the Post this week during a stroll of Bell Tower Green Park. It’s the site of where he began his banking career and the final major project of his tenure on council. He calls it “the living room of our community.”

“Twenty years from now, if I live somewhere else and if I come back to Salisbury, this is where I’m going to come,” Miller said.