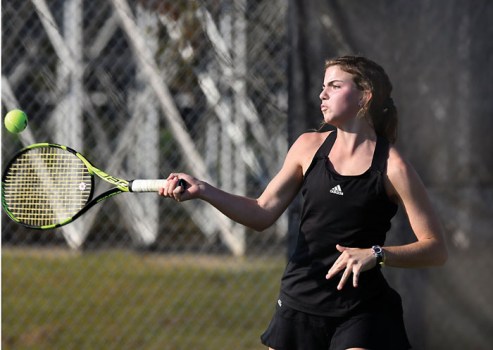 Salisbury's Abby Campion is co-player of the year. File photo by Wayne Hinshaw/For the Salisbury Post 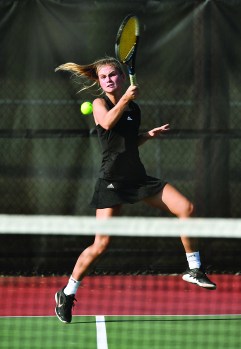 Salisbury's Millie Wymbs is co-player of the year. File photo by Wayne Hinshaw, for the Salisbury Post

SALISBURY  — Millie Wymbs and Abby Campion were sensational singles players for Salisbury High this season, hammering balls as hard as the guys.

They showed the talent to pound opponents as well as the grit to stage a comeback.

But it was as a doubles duo that the Hornets’ No. 1 and No. 2 seeds made their biggest impact.

They are the Post’s co-players of the year for the fall season.

Wymbs was voted Central Carolina Conference Player of the Year.

Both girls were named All-State by the North Carolina Coaches Association. They were named co-MVPs for Salisbury’s team.

Wymbs was 16-3 in singles, while Campion was 18-1. As a doubles team, they were perfect until they fell 6-3 and 7-5 to Hendersonville’s Ramsey Ross and Eliza Perry in the 2A individual state semis. Ross and Perry won the state championship.

“Their chemistry was great,” Salisbury coach Milt Griffith said. “Like all the good doubles teams, when one was down, the other one could pick them up. They understood each other’s strengths and weaknesses. They built each other up and played some outstanding matches together.”

Girls tennis is a fall sport, but the 2020 season was delayed by COVID. The girls finally got to start the last week of April and played into June. Wymbs was a freshman then and Campion was a junior, but they were already forming a bond as a doubles team. They won the CCC tournament. At the state tournament, they won a match to reach the quarterfinals.

There was a very limited break between school seasons. This one started the first week of August.

“They only had about a month off, but they worked on their games and they came into this season very well prepared,” Griffith said. “I could see that they were playing even better together, and they were going to make some serious noise.”

Besides their success at the state level in the individual tournament, Wymbs and Campion led a Salisbury team that had to replace standouts Lillie Rusher and Meredith Burton, who had formed a state runner-up doubles team back in June.

Among other things, Salisbury (19-1) won its 19th straight CCC championship.

“This was very much a rebuilding year for us,” Griffith said. “But we won all our conference matches and we made it to the Final Four in the dual team playoffs, and that’s not bad for a rebuilding year. The Frick girls (Emily and Ellison) really stepped up for this team as seniors (as the No. 5 and No. 6 players) and Abbey Lawson and Kate Burton did a great job in the middle. As far as playing hard and competing, this team did everything I could have asked for. This was a very hard-playing team.”

The top six Hornets made All-CCC team as well as All-Rowan County.

Griffith has coached the Salisbury girls with major  success since 2015. He believes the Hornets can remain among the elite in 2A next fall.

Kate Burton and Lawson will be back for their senior year, and the Hornets will have two Wymbs sisters, with Cora coming from Sacred Heart to join Millie. Griffith believes freshman Lucy Barr has great potential, and she’s been working hard on her game.

Carson lost a great class, but still went 12-4 and took second place in the South Piedmont Conference. The Cougars were led by Riley Isley and Bree Whittington, who qualified for the 3A state tournament as a doubles team.

West Rowan didn’t have a stellar season, but Lacy Waggoner, a senior who played No. 1 for the Falcons, did. She was one of the best in a stacked South Piedmont Conference that included outstanding players from Lake Norman Charter and Northwest Cabarrus.

Thirteen girls qualified through their conference tournaments for regional play in doubles or singles.

Milt Griffith — Coach of the Year

Jaysa Causby, Sr. — No. 2 for East. regional qualifer in doubles

Addison Barrett, Sr. — No. 3 for East, regional qualifier in doubles