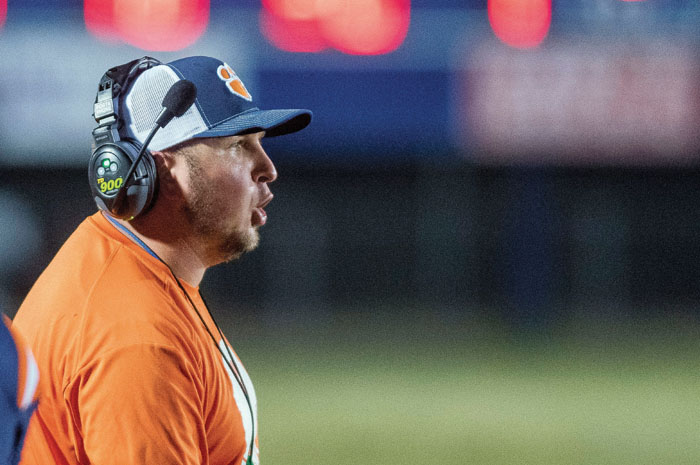 It was a leap of faith by both parties that worked out well.

“It’s bittersweet leaving Carson,” Crosby said. “I was all-in at Carson, got nothing but great support from everyone and I have nothing but love for the Cougars. But Mount Pleasant is an incredible opportunity for me and my family.”

Crosby, who grew up in China Grove at a time when South Rowan was the only school in southern Rowan, pumped blood and sweat into the Cougars’ football program from the time he was hired in February 2019.

While the bottom line for Carson during Crosby’s tenure was a modest, COVID-plagued 9-19, he gave Carson fans three seasons of small steps forward and plenty of exciting, competitive games. The 56-55 overtime win against South Iredell last April should stand the test of time as one of the all-time Carson victories.

In return, Carson has propelled Crosby into what he views as a dream job at Mount Pleasant. He and his wife (Erin) and son (Williams) live in Cabarrus County, so he’ll have less time on the road in the mornings and in the evenings.

The reduced commute is part of the attraction, but his feelings for Mount Pleasant obviously run deeper than mere savings in gas and minutes.

When he was a Catawba College student, Crosby did his student teaching at Mount Pleasant and helped out with football and baseball as he prepared for a coaching/teaching career. Mount Pleasant head football coach Michael Johns went out of his way to make Crosby an integral part of the program, and that extended into the summer months.

“I was trying to find a job and Coach Johns gave me an opportunity to help,” Crosby said. “I learned so much from him.”

The first job Crosby landed was as an assistant seventh grade coach at Northwest Cabarrus Middle, but his foot was in the door. The next season, he was head coach of the eighth-graders.

He spent six seasons at Central Cabarrus, working under Donnie Kiefer for five and for former East Rowan head coach Kenneth McClamrock for one. Crosby directed defenses and he learned a great deal from Kiefer, whom he still regards as his primary coaching influence.

Then Crosby was at Cox Mill for a year, working for South Rowan grad Craig Stewart, before Carson gave him that first high-school head coaching shot. He was picked to follow Joe Pinyan, one of Rowan’s coaching legends.

“That first year at Carson we were 2-9,  but that team stuck together,” Crosby said. “We got better last spring, and then we got to the playoffs this year (for the first time in six seasons). I’m proud of the work the guys did to get better, and, honestly, everything at Carson is going in the right direction. Good young players and the jayvees were good. There’s speed coming up from the jayvees that’s really going to make a difference.”

Things were looking up at Carson, but when Johns announced late in Mount Pleasant’s season that he would be stepping down after 23 seasons, Crosby was intrigued and went through the application and interview processes. He got the call to replace Johns, who built a sound, respected program in a tiny Cabarrus town that is about half the size of China Grove.

Many communities have been splintered as growth has brought more schools. The southern Rowan community is split among Carson and South Rowan now, and there’s been almost continuous subdividing of Cabarrus communities over the last two decades.

But Mount Pleasant is still intact, still is a town and a community obsessed with football. That’s very appealing to Crosby.

“It’s a place where the community shuts down on Friday to go to the football game,” Crosby said. “It’s the biggest thing in town.That means there’s some pressure to win, but that’s a challenge I’m looking forward to.”

Mount Pleasant usually was pretty good over the last two decades and sometimes was better than that. Johns coached nearly 300 games and he maintained a winning career record

“They’ve got tough, hard-nosed kids, similar to the kids I had at Carson.” Crosby said. “Coach Johns is a true legend. Those are big shoes to fill.”

Crosby was a bulldog of a player at South Rowan, a fullback/linebacker in football and a catcher/third baseman in baseball.

He learned the games early from his father, Danny, who was a long-time coach, AD and groundskeeper at South Rowan.

Crosby played college football at Averett, but concussions were an issue. He made the prudent decision to end his playing career and finish his education close to home at Catawba.

Now he’s doing what he’s always wanted to do.

Mount Pleasant fans will find that he’s not a coach who’s going to try to cram Tigers into a rigid system. He’s flexible. He’s going to go with whatever is best suited to his personnel.

Last spring, Carson had a throwing quarterback and a talented group of receivers and threw the ball 189 times in a seven-game season.

This fall, Carson’s strengths were a running quarterback and a bulldozer of a fullback, so Crosby installed the split-back veer. It worked well enough to get the Cougars back in the playoffs, and they performed admirably in a respectable loss to Crest. Carson put together a drive against Crest that consumed an entire quarter.

Crosby will leave Carson in better shape than it was when he arrived. That’s a major goal for any coach.

He’ll be at Carson a while longer.  He’ll start work as a P.E. and weight lifting teacher at Mount Pleasant on Jan. 14. The second semester there will start on Jan. 18.

Week 2 in the 2022 season will be exciting. Carson plays Mount Pleasant.