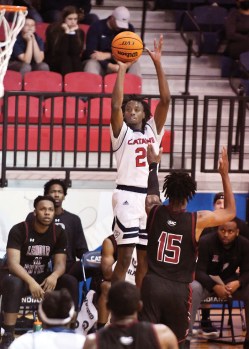 Catawba’s O’Mazeon Tinsley, a 5-foot-8 guard, goes up for a 3 pointer. Photo by Wayne Hinshaw, for the Salisbury Post

Catawba’s Peyton Gerald puts up a one-hander over LR’s Cooper Fowler. photo by Wayne Hinshaw for the Salisbury Post 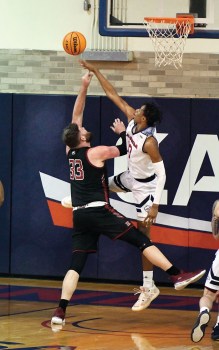 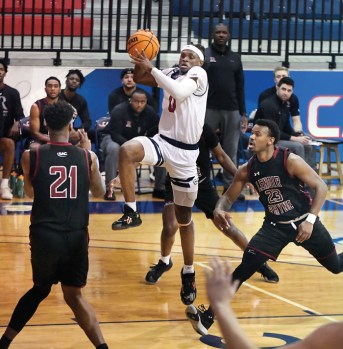 Catawba's Caleb Robinson goes up for a shot Saturday. Photo by Wayne Hinshaw, for the Salisbury Post

SALISBURY — Catawba’s men’s basketball team is making a valiant effort to revive a season that appeared to be heading nowhere.

The Indians have become relevant and exciting. They have won two straight overtime games.

The second one happened Saturday at Goodman Gym where the Indians pulled out a 91-89 decision against rival Lenoir-Rhyne.

Peyton Gerald dunked to get Catawba (4-6, 3-5) started in overtime. Caleb Robinson had a basket and two free throws.

Lenoir-Rhyne (3-5, 2-3) coughed up turnovers on its first three possessions of overtime.

L-R shot 45.3 percent, made 10 3-pointers and committed only nine turnovers, even with that meltdown during the extra session.

Michael Hueitt, who played at UNC Greensboro, debuted for the Indians and was a difference-maker with four 3-pointers and 14 points.

Robinson was excellent again with 19 points and 10 rebounds. Trevion Lamar had 17 points, six assists and six rebounds. Gerald scored 13. Myles Washington came off the bench to get 10.

Catawba appeared headed for a more routine win in regulation, but the Bears overcame a 12-point deficit in the final seven minutes.

L-R came out hot and led by 10, but Catawba crushed the Bears in the latter stages of the first half for a 50-39 halftime lead. Catawba shot a sizzling 63 percent in the first half.

Catawba will host UVA Wise in its final contest before the holiday break on Saturday at 4 p.m.