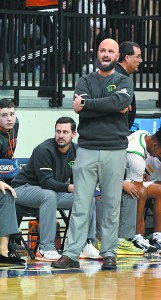 It came in the first Central Carolina Conference game.

North lost at Thomasville 72-57 on Friday in a rescheduled affair.

“They outplayed us, they outworked us, and they just played harder than we did,” North head coach Jason Causby said.

Thomasville (1-1, 1-0) had been scheduled to play at Salisbury, but the schedule was adjusted for Thomsville to play the Cavaliers (5-1, 0-1) instead.

“We didn’t have a great week of practice, we didn’t get better, and if you’re not getting better, you’re getting worse,” Causby said. “We’ve had some early success, and that’s fine. But sometimes that hampers growth.”

“The third quarter, we got back to 42-41, but we didn’t capitalize on our opportunity,” Causby said. “Then it got away from us.”

In the fourth quarter, the Cavaliers had to chase the Bulldogs. Johnathan Gladden got loose for four 3-pointers as the home team pulled away.

North got 13 from Derrick Hanson, 11 from Quashawn Carpenter and a season-high nine from Pharrell Hailey.

Hanson and Carpenter both are averaging 12.5 points per game. Thomasville held Amir Alexander, who came in averaging 12, to half his average.

“We’d been able to get the critical stops and the key scores in all our close games,” Causby said. “Tonight we didn’t, and that can be traced to poor practice habits. Hopefully, this is the wakeup call we needed. If it’s not, we might squander the opportunity we have for a special season.”