High school basketball: West girls get back in win column at South 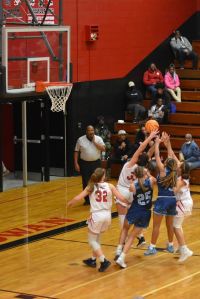 LANDIS — West Rowan’s talented young girls put losses to Salisbury and Carson behind them on Friday and raced to a 70-50 victory at South Rowan.

It was a South Piedmont Conference win as well as a county win for the Falcons (3-2, 1-1).

West took a 10-point lead after a quarter and led 37-26 at halftime after the teams traded buckets in the second quarter.

Sophomores Lauren Arnold (27 points) and De’Mya Phifer (24) broke loose for career highs for the Falcons, who kept the Raiders (2-5, 0-2) at bay in the second half.

Arnold and Phifer accounted for 17 of West’s 18 in the second quarter.

Arnold, who scores inside and out, has put up double figures in every game this season, but this was her first real explosion. Her previous career high was 21 as a freshman.

Phifer scored 20 against Carson on Tuesday and went right back to work.

West hadn’t hit the 70 mark since Abigail Wilson scored 31 and Taylor Poole scored 18 to lead a 71-54 win against Statesville in January 2000. That was the game in which Wilson reached 2,000 career points.

South showed its made some strides from a 66-22 loss to West Rowan last season and a 65-26 Christmas tournament loss to the Falcons in the 2019-20 season.

South has increased its offense considerably, so the next step is getting more stops. South is allowing 62.5 points per game.

“We started well but didn’t adjust very well as this game went on,” South head coach Alex Allen said. “But we did play hard.”

Bethany Rymer, a senior making a basketball comeback after not playing last season, made two 3-pointers and scored 16 for the Raiders.

She’s scored 106 points in seven games and is closing in on 700 for her career.

Mackenzie Chabala scored 14, her fifth game in double figures this season. She works hard on the boards and is getting to the foul line a lot.

West has a big game at home next Friday against undefeated Northwest Cabarrus. South will host Central Cabarrus.