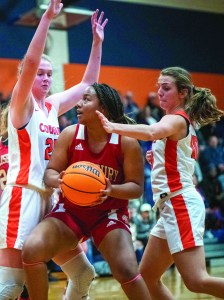 HUNTERSVILLE — Carson’s girls basketball team had some girls under the weather, but the shooting percentages were extremely healthy.

Carson shot 67 percent in the first half at Lake Norman Charter and took a secure 33-12 lead at halftime.

The Cougars went on to breeze 67-43 in Friday’s South Piedmont Conference contest.

“We not only shot well, we played awesome defense in the first half,” Carson head coach Brooke Stouder said. “We communicated, we boxed out, we rebounded. We were more disciplined than in some earlier games.”

“She can shoot it and she can drive it,” Stouder said. “She’s a very skilled player.”

Carson’s first-half effort was led by senior Hannah Isley, who scored 16 of her 20 prior to the break.  She’s had three games this season with 20 or more.

Catawba signee Mary Spry took over in the second half. She had 17 of her career-high 25 points after the break. The 6-footer made three 3-pointers and topped 20 for the fourth game in a row. Shchae was efficient with 11-for-15 field-goal shooting.

Spry came into the game averaging 18.4 points and 13.2 rebounds. She’s shooting 57 percent from the field for the season. She boosted her career points total to 865.

Aliayah White scored 11 on 5-for-5 shooting. She scored nine in the second half.

With Makayla Johnson out with illness, Carson (5-1, 2-0) elevated Brooklyn McBride and Jadyn Steele to the varsity and both girls played in the fourth quarter. Steele scored two points.

“It was a really solid road win for us,” Stouder said. “We got better tonight. We moved the ball a lot better, and when they pressured us in the second half, we handled it.”

Carson returns from exams to host Concord next Friday.

Carson finishes the pre-Christmas portion of its schedule with challenging home games against North Rowan (Dec. 21) and Charlotte Catholic (Dec. 22).

Charlotte Catholic is 6-0 and is ranked second in the state behind Apex Friendship.