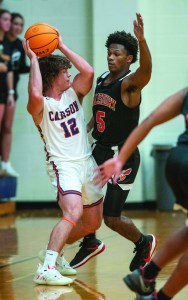 But Carson also has had a few nights where it just didn’t have it or just couldn’t find it, and Friday’s game at Lake Norman Charter qualified as one of those. Carson’s most prolific quarter was 11 points in the second.

Carson fell behind 31-20 at halftime, and the Knights (3-2, 1-1), who put four men in double figures, wrapped up the breezy victory in the third quarter.

The “zero guys in double figures” thing can’t be overcome. It happened twice to Carson last season, in the 59-19 loss to North Iredell and in the 69-29 loss to Davie.

It did not seem likely to happen this season, with the Cougars bringing back five of their top seven scorers and adding another capable shooter in Cameron Burleyson, who missed last season following elbow surgery.

But it was an off night for just about everyone.

Balanced Lake Norman Charter got 12 points from Charlie Fox, 11 from Koy Burnette and freshman James Carswell and 10 from Isaiah Martino.

Carson returns from exams to entertain Concord, which appears to be one of the SPC’s top teams.

Central Cabarrus, which slaughtered Lake Norman Charter 85-43, is picked by just about everyone as the favorite.