‘He will be missed’: Consistent, caring newspaper carrier mourned by family, friends 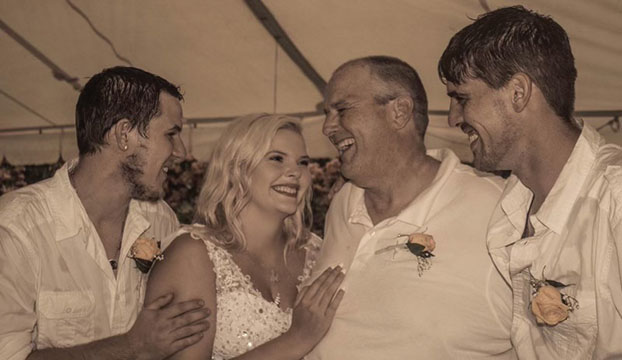 Kevin Coughenour surrounded by his children. Coughenour was not only loved by his family, but by the customers who he delivered newspapers to on his route. From left to right: son Andrew, daughter Taylor, Kevin and son Chris. Phto submitted.

SALISBURY — When she was a child, Taylor Bolton always looked forward to the early mornings when she was invited to tag along with her father, Kevin Coughenour, on his newspaper delivery route.

“Honestly, it was the best time ever,” Bolton said. “I got to spend time with my dad. It was just me and him.”

There was also usually a bag of McDonald’s with a chicken nugget happy meal, fries and a Hi-C for Bolton and a Big Mac with no lettuce, large fry and sweet tea for Coughenour.

“He would get me McDonald’s and we would listen to the radio and sing,” Bolton said. “We would just have a good time.”

For Coughenour, delivering the Salisbury Post wasn’t just about getting people their news, although he cared about that too. It was an opportunity to spend time with his beloved kids, call old friends or form personal connections with the customers he was serving. Along with dropping the paper at their driveway or doorstep, Coughenour would always check on the people on his route.

“He made some lifetime friends delivering to the people in eastern Rowan County,” Bolton said. “They adored him. Most of them had his personal cell phone number and they would call him. He would stop and check up on them.”

The script was flipped when Coughenour contracted COVID-19 last month and was admitted to the hospital. The customers he saw on a daily basis for years contacted the Salisbury Post for updates or checked in with his family members.

Along with his family, Coughenour’s customers are now mourning. Kevin Coughenour died at the age of 54 on Dec. 8 due to complications from COVID-19.

“He will be missed and that’s for sure,” said Erica Miller, his sister. “He was a hardworking, dedicated father, grandfather, brother. He was a good man.”

Coughenour delivered the newspaper dutifully for more than 30 years.

“Kevin had become more than just a carrier since me taking on the director position in June,” said Brittany Montaigne, circulation director for the Salisbury Post. “He had become a friend. He was a huge asset to our carrier team on the back lot and there isn’t a person you’ll meet who didn’t recognize his warming smile and the way he could make anyone laugh. Our hearts are already feeling the void of missing him, but, in the weeks to come, my hope is that we can share the laughs that Kevin shared with us to get through this together.”

Coughenour’s career as a carrier started when he began substituting for other Salisbury Post delivery people who were sick or couldn’t make a shift. He quickly proved his reliability and earned a route of his own. For more than 20 years, Coughenour was responsible for delivering papers to hundreds of customers in southeastern Rowan County, from Faith Road in Salisbury down to Richfield.

“Dad’s route took him close to eight hours,” Bolton said. “He had over 800 customers.”

If Coughenour didn’t have any visitors in his car with him, he’d have the radio tuned to 96.9 and listen to news. If he started to feel tired, he’d stop by The Morning Glory coffee shop in Rockwell. He didn’t even need to place an order. As soon as the barista saw his car they’d get started on “the newsman” special — a vanilla white chocolate coffee, extra sweet.

Coughenour typically arrived at the loading dock at the Salisbury Post building in the early hours of the morning, there in time to help unload trucks filled with papers and divide them for the other carriers. Sometimes he would have one of his three children in tow, whether it was his youngest, Bolton, his eldest, Chris, or middle son, Andrew. Coughenour always tried to make it fun for his kids, but he also required them to pull their weight.

“He made us work,” Bolton said. “It wasn’t just a good time all the time. We had to roll his newspapers for him.”

Bolton even got her own Salisbury Post route recently as a second job while she attends cosmetology school.

Coughenour’s other family members have also helped out with his route from time to time.

Miller and Rhonda Cornish, Coughenour’s other sister, would take on his route sometimes when he went on vacation. Coughenour would always be sure to tell them exactly where they should put the paper so that the customer would be able to access it easier.

“He would try to get (papers) perfectly in the driveway,” Miller said. “Or, if he knew his customers couldn’t walk that well, he’d pull in their yard and make sure to get it to the doorway or take it to their house.”

Coughenour’s customers noticed his attentiveness, as did his employer.

“While Kevin was always willing to help out in some way, he always took care of the readers on his route,” Salisbury Post Publisher John Carr said. “During his illness, we were challenged to cover his large route, and had calls from some of his customers when we missed their delivery in error. Many knew Kevin personally and all expressed were concerned for him and commented on the excellent level of service he provided. Kevin is missed by all of us and those homes he delivered to.”

When Coughenour did take a few days off, he would often go to Norfolk, Virginia to visit family there. Coughenour’s father moved their family to Rowan County from Norfolk when Coughenour was a teen.

Family always came first for Coughenour. He kept a constant stream of communication with his children and siblings.

“It didn’t matter how many times a day I could call, he’d either answer my phone call and message me and tell me he’d call me right back,” Andrew, his son, said. “He’d call and say, ‘What do you need? What can I do for you? What can I help you with today? What can we talk about?’ He wanted to know every little detail of our lives he could soak in. He always wanted to be a part of it.”

Bolton said she and her father would talk on the phone for hours as they both completed their routes, recreating the scenes from her childhood but through a phone and in separate cars. They would talk about “everything,” including Coughenour’s dream of one day opening up a haunted trail. Halloween was Coughenour’s favorite holiday and every October he took his family to local haunts.

When it came to his grandchildren, nieces and nephews, Coughenour was always there as a listening ear.

“My daughters and my sisters’ kids, they all looked at him like a father,” Miller said. “They felt like he was a safe place they could go. He always had his home open to them. Any problem they had they were able to come to him.”

Bolton said Coughenour had a standing date with her eldest daughter. Every Thursday, Coughenour would pick her up and take her to McDonald’s for a chocolate shake.

Coughenour’s family loved him back.

When Coughenour was in the hospital on Thanksgiving day, his family gathered in the parking lot with to-go containers stuffed with holiday food. Since only two people were allowed to deliver Coughenour’s meal to him in his room, the rest of the family video called him while they ate together.

Coughenour loved his friends too, including one of his closest confidants, Beverly Everhart.

Everhart started off as one of Coughenour’s customers, but he eventually recruited her to join the Salisbury Post’s carrier team. The two continued to bond and would talk almost daily, go shopping together and look after each other’s children from time to time.

Even after Everhart stopped carrying the paper, she and Coughenour remained friends. They met with other pals for dinner almost every weekend at a local restaurant near Granite Quarry.

After Coughenour was admitted to the hospital, it was Everhart who picked up his route. She met many of the customers Coughenour had grown close with over the years.

“I have met some of his customers and they all asked about him all the time and understood the situation,” Everhart said. “They all love him.”

A memorial service for Coughenour will be held at Powles Staton Funeral Home at 913 W. Main St. in Rockwell on Friday from 6-8 p.m. The funeral will be held on Saturday at 1 p.m. at Powles with graveside service at Rowan Memorial Park at 2:30 p.m. Coughenour’s family has requested that attendees make donations to the funeral home in lieu of other gifts to help with the expenses of the funeral.

Editor’s Note: The story has been updated to reflect the correct times for Coughenour’s visitation and funeral.