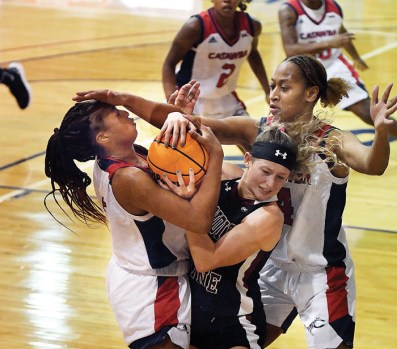 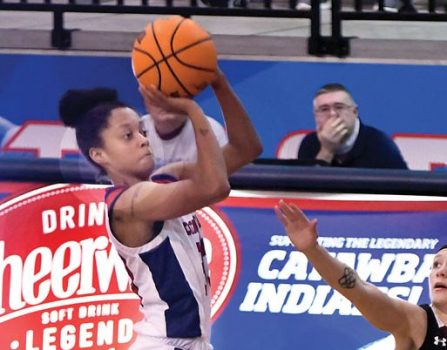 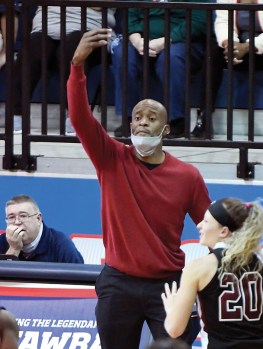 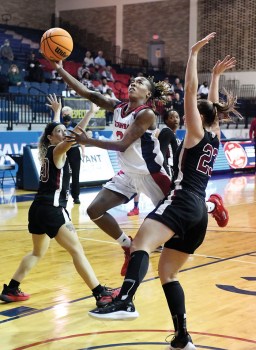 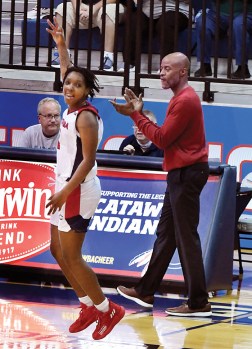 Catawba's Janiya Downs reacts to hitting an important 3 pointer late in the game with Coach Terence McCuthcheon; behind her. photo by Wayne Hinshaw for the Salisbury Post 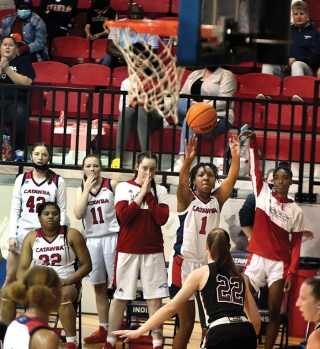 Catawba's Janiya Downs shoots a 3 pointer over LR's Maddie Dillinger (22) late in the game in front of the team. photo by Wayne Hinshaw for the Salisbury Post

Taisha DeShazo played 34 minutes without scoring, which is like Corey Seager going 0-for-34 at the plate.

The Indians couldn’t get to the foul line, shooting three throws the entire afternoon.

Catawba had three offensive rebounds and two second-chance points, which is not ideal.

And then there was that brutal, five-point second quarter in which Catawba shot 2-for-12 to dig a halftime hole.

None of it really mattered as it turned out. The Indians, led by Shemya Stanback and Janiya Downs, were great for about five minutes in the fourth quarter. That’s all it took.

You can’t win them all, but so far this season, Catawba has.

They’ve had a few pretty ones and quite a few ugly ones, but wins are wins. Ranked as high as 12th in one poll, they are 9-0 overall and 7-0 in the South Atlantic Conference.

The key stat for the Indians is turnovers forced because steals create much of their offense. They had a humongous 29-13 edge in the turnover battle. They scored 30 points off L-R turnovers.

The teams played a routine first quarter. The Bears (2-5, 1-4) have struggled this season, but they hung with the Indians, and were down 17-15.

Then Catawba went ice-cold in the second quarter. The Bears moved in front 27-22 at halftime and pushed their advantage to eight in the third quarter.

Late in the third quarter, Catawba was shooting 2-for-14 on 3-pointers and was at 34 percent from the field.  Lauren Ford made Catawba’s third 3-pointer to put the Indians ahead 36-34 going to the fourth quarter.

The biggest shots of the day came from Downs, the former South Rowan star, and Stanback. With Catawba leading 40-39 with 5:18 left, Downs made a 3-pointer. When Stanback made a 3-pointer on the next possession, Catawba’s lead swelled to 46-39, and that sudden seven-point lead felt like 17.

The Indians had the separation they’d been seeking.  Then Stanback went crazy, stealing and wheeling — three buckets in about 90 seconds — and it was over.

Catawba had 17 more field-goal attempts than the Bears. Volume matters.

Catawba shot 8-for-11 in the fourth quarter and managed to finish the game at 43.4 percent. Catawba was 6-for-20 on 3-pointers, but made four of its last six.

Downs scored 11, doing most of her damage in the fourth quarter. Thorne scored 10.