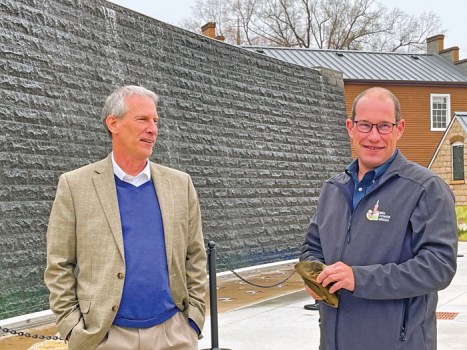 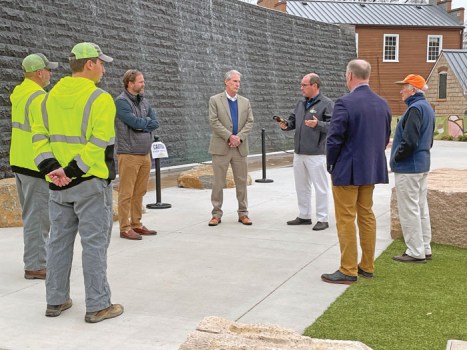 SALISBURY — In a visit to Salisbury on Friday, North Carolina Secretary of Natural and Cultural Resources Reid Wilson praised the Bell Tower Green Park and discussed the millions of new dollars in spending included in the 2021-23 state budget.

Wilson’s department oversees a number of the state’s resources, including historic preservation, state parks, art, history and science museums, aquariums, the African-American Heritage Commission and the Office of Land and Water Stewardship. Gov. Roy Cooper appointed Wilson to his current role in 2020. Before then, Wilson was executive director of the nonprofit Conservation Trust Fund for North Carolina from 2003 to 2017 and served nearly eight years in former President Bill Clinton’s administration at the U.S. Environmental Protection Agency.

Wilson said while a public-private partnership approach for projects similar to Bell Tower Green can be found across the state, Salisbury is unique in that the park was almost entirely funded from the “incredible, generous families” who made it a reality.

“This project is particularly ambitious,” Wilson said. “Salisbury is special in that way.”

The state budget allocates a little more than $227 million in the 2021-22 fiscal year and $231.3 million in the 2022-23 fiscal year for the Department of Natural and Cultural Resources. Wilson said that includes tens of millions more dollars that will be allocated for the Parks and Recreation Trust grant program, zoos, museums and libraries. Rowan County lawmakers also helped secure a $200,000 grant for maintenance and upkeep of Bell Tower Green Park, which is in addition to a $350,000 Parks and Recreation Trust Fund the city received in 2018 to put toward the city’s purchase.

Wilson said the budget more than doubles funding for zoos, while funding to help libraries was increased by $11 million. Arts organizations can seek grants from a pool of money $16 million higher than funds allocated in previous budgets. Wilson said those “exponential increases” will help such facilities not only survive, but thrive.

“These investments are a sign that state leaders of both parties understand that North Carolinians value their history, their culture, their parks, their trails,” Wilson said. “We are the department of things people love about North Carolina.”

The North Carolina Transportation Museum, another stop on Wilson’s trip, received $10 million to cover the costs of renovating the Powerhouse facility and constructing a garage to house historic rail cars, along with $280,000 to replace lost revenue from the pandemic.

Wilson said the pandemic also sparked a renewed desire among North Carolinians to be outside and in nature, which is a boost to overall quality of life. Early in the pandemic, most indoor facilities were closed to the public to mitigate the spread of COVID-19, and some parks were forced to close because of those who wouldn’t adhere to social distancing or masking protocols. Wilson recalled reports that some North Carolinians were crowding state and local parks to steal soap and hand sanitizer.

But closing the doors of the state’s museums and other recreational facilities provided a new opportunity. Because many staffers were able to conduct more research, a number of museums have new exhibit panels with additional educational information. The department also began shifting its educational outreach online, with about 1,500 pieces of educational content garnering more than 250 million views across the state, Wilson said. That opportunity allowed the department to broaden its reach.

Wilson said while school field trips are slowly picking back up, he anticipates a more normal volume in the spring.

“So now when you go there, there’s more to learn about,” Wilson said. “We took advantage of a bad situation to improve a lot of our sites and provide more educational material there.”

One focus in that educational outreach is information about climate change and its impacts. Wilson said the fire at Pilot Mountain and the ongoing drought are examples of how climate change reaches beyond coastal communities. Among the goals for the department is reducing its carbon footprint across hundreds of facilities, becoming more energy-efficient and helping communities become more climate-resilient. Wilson said many scientists work with nature and have the skills necessary to explain climate change and its effects.

“I think we have a role to play in providing very objective, scientifically based information about what climate change is, what causes it and what are the harmful effects, what can anyone do about that,” Wilson said. “We have a little team putting their heads together. There’s plenty of information about climate change but I want this just to be very focused in science but communicated in a way that’s understandable.”

Wilson said the reverence for historic preservation is evident in places like Salisbury, and the location of Bell Tower Green Park furthers the city’s downtown vibrancy.

“I always love coming to Salisbury,” Wilson said. “It’s a beautiful town. Lots to do here for a relatively not huge city. And it is a place where there’s nature and arts and culture and history all going on at the same time, which is great.”