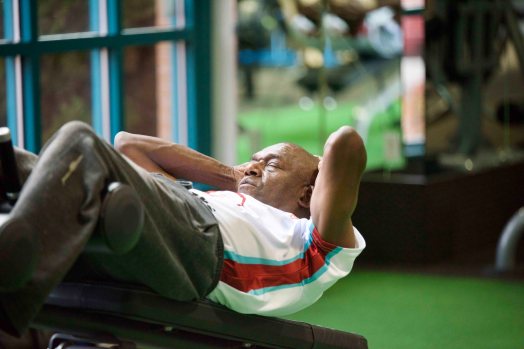 Carl Blankenship/Salisbury Post - John Peterson more than an hour into his attempt. He performed a total of 13,944 repetitions. 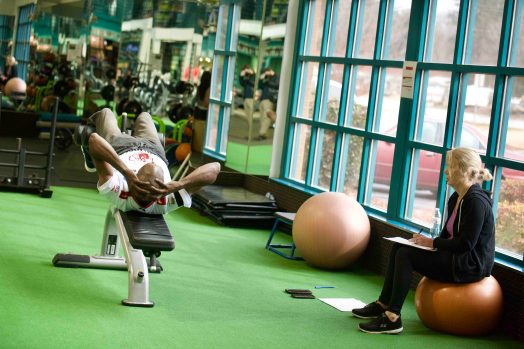 Carl Blankenship/Salisbury Post - John Peterson has performed feats like this before and he always enlists counters to track his repetitionms.

John Peterson did crunches for two hours straight on Thursday, and about five minutes after he was done,  he jumped back in to see how many more he could do in a minute.

The Rowan County native powered through 13,944 repetitions at The Forum in two hours, more than doubling the number of crunches he clocked in a one-hour attempt in 2018. He was lying back on a stand at an angle, with a Shriners Hospitals for Children shirt representing the nonprofit medical provider and his eyes closed in silence except for the sounds of other people working out in the gym.

The 64-year-old set a record with his attempt, because he says no one else has ever done it. Rather than calling in the Guinness Book of World Records, Peterson uses the website Record Setter, which allows people to track and record unique feats. He added an extra layer of difficulty by doing the attempt at an angle. After he crossed the two-hour mark and got off the stand, Peterson said he felt pretty good and he was not disappointed by not quite hitting the 14,000 mark. His estimate going into the feat was 13,000 to 14,000 repetitions. He said it was a “little different” than one hour of crunches.

“I’ve been doing crunches all my life,” Peterson said, adding decades ago he became interested in the importance of core strength for supporting the body and preventing ailments like back pain resulting from pressure on the spine.

Peterson said he regularly does crunches for 30 minutes at a time. Sometimes he wears a weighted vest. So, when he takes it off he feels “light as a feather.”

Rayna Gardner, manager of The Forum, was one of two people counting each and every repetition. This time around was a bit more manageable with help, trading off counting every 30 minutes rather than going for an hour straight.

“I think I’d rather do the crunches, though I’d never make it,” Gardner said.

The tally sheets for the crunches were filled with endless marks during the attempt. Gardner would periodically let him know how many he had done and how much time he had left.

Gardner helped Peterson with other attempts in the past, but this is the longest by far. The counting is mind-numbing, but she said the outcome is worth it. Peterson always makes it through an attempt and hits his goals, if not a bit more, she said.

“He’s a big motivator here,” Gardner said. “People look up to him and watch the way he pushes himself physically.”

Peterson said he is now considering a 24-hour attempt with five minute breaks each hour. Gardner said he will need to solicit an entire list of volunteers to count.