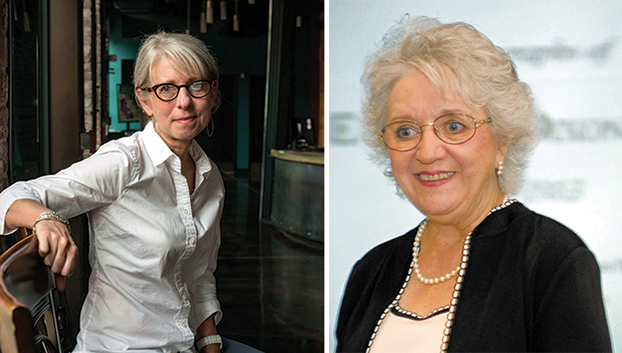 SALISBURY — Leaning over the table of a crowded coffee shop in the summer of 2019, Melissa Oleen made her pitch to Jennifer Hubbard.

“We could see each other’s entire face as we leaned in so close so you could hear (Hinshaw) and me tell (Hubbard) how easy it was to be the Friends’ president,” Oleen said. “How standard funding streams were well established, how the annual book sale was covered and it covered most of the summer reading cost. How volunteers can work in our library spaces; they can come and go doing friends’ projects.”

When Hubbard was just a few months into her first term, the job had been complicated by a global pandemic.

Nonetheless, Hubbard led the organization as it supported the library through the evolving pandemic.

“(Hubbard’s) leadership of the Friends has provided a sense of much needed consistency during an ongoing period of momentous change,” Oleen said.

Hubbard’s leadership earned her the honor of being named Friend of the Year by the North Carolina Public Library Directors Association. The association is a collective of library directors from across the state and the award is given to a person who has contributed a significant amount of time and energy to help the library. Hubbard was nominated for the award by Oleen and selected from nominees representing libraries both small and large from the coast to the mountains.

Hubbard received the award on Thursday afternoon during the NCPLDA’s virtual annual meeting. She wasn’t the only Rowan Countian honored during the event.

Betty Dan Nicholas Spencer, who died at the age of 84 last year, received a posthumous award for being Benefactor of the Year. Spencer was a longtime supporter of the library, in addition to being a prominent business owner and historian.

“For public libraries in NC, especially those of our size, it’s a really big honor,” Oleen said. “I’m proud of them and I guess I’m proud to be in a community that has such staunch supporters of the library.” 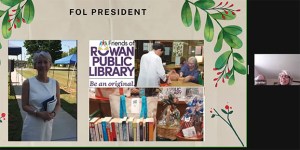 Jennifer Hubbard, president of the Friends of Rowan Public Library, was honored as Friend of the Year by the North Carolina Public Library Directors Association. During the same virtual ceremony, Betty Dan Nicholas Spencer was posthumously named Benefactor of the Year. Ben Stansell/Salisbury Post

“Jenny rose to the occasion”

When Hubbard agreed to take on the role of president, she was also agreeing to serve her first term on the Friends of Rowan Public Library Board of Directors.

It might’ve been her first time helping the library in an official capacity, but Hubbard’s appreciation for public reading institutions dates back to her childhood.

“My mother took the three of us to the library every week when we were children, and that’s what started it all,” Hubbard said. “I’m so grateful to her for introducing me to the beauties of the public library.”

An early appreciation for literature led Hubbard to a career as a high school and college English teacher. She’s also published several novels.

Although Hubbard’s presidency could have easily been tainted by the pandemic, Oleen said she continued to push the library to push forward with new fundraising tactics.

“Jenny rose to the occasion,” Oleen said. “She felt the increased responsibility and she actively led the friends to take on new endeavors.

Hubbard catalyzed the library hosting Second Saturday Bookshops at West End Plaza, during which it sells used books to raise money. Hubbard also enlisted her sister’s help in selling more  valuable used books in the library’s possession to book collectors through eBay. By selling them online instead of locally, Oleen said the library can ensure that it receives the best price for the books.

Additionally, Hubbard and the Friends of Rowan Public Library enlisted the services of a marketing agency to build a new website that streamlines membership applications and allows members to donate online. The website’s address is www.friendsofrpl.org.

Hubbard’s advocacy for the library extended into the public as well. She spoke at the grand opening of the West Rowan branch of the library in Cleveland earlier this year and has submitted opinion pieces in the Salisbury Post rallying support.

Hubbard is now in the midst of her second term as president.

A dedicated and local library advocate

The benefactor of the year award is typically given by the NCPLDA to someone in North Carolina who has donated a significant amount of money to a public library system.

Betty Dan Nicholas Spencer certainly fit that mold. But her support of the Rowan Public Library didn’t end with a check.

“Betty Dan did all of the things library directors love in benefactors,” Oleen said. “She served multiple terms on multiple library boards. She could be called upon to assist with special projects and short term committees that needed real action. She was a dedicated and vocal library advocate and a regular library user.”

“Betty Dan understood the importance of recording the past accurately,” Oleen said. “She worked passionately to preserve local history and genealogies. Her commitment to these things were manifested through generous donations of time, talent, funding and research products.”

One of Spencer’s passion projects was recording the history of Dixonville, a largely African-American community in Salisbury that was disrupted by urban renewal in the 1960s. Urban renewal dispersed the community’s residents and led to the destruction of historic structures.

“Through Betty Dan’s efforts, over 600 appraisal photographs of Dixonville homes and businesses were acquired by RPL,” Oleen said. “But she didn’t stop there. She went on to gather additional pictures, she spoke with local families and she tried to provide a voice for those who had been displaced via meticulous documentation and record keeping.”

Spencer’s published book, titled “Remembering Dixonville and East End,” is a compilation of her extensive research.

Not only did Spencer give money, equipment and her time to support the Rowan Public Library’s Edith M. Clark History Room, but she also spent hours transcribing old primary source material into typewritten documents. Oleen said Spencer helped organize the history room to make it more accessible to the public and established an endowment fund that will enhance the history room’s collections and capabilities for years to come.

Before her passing, Spencer facilitated a $48,000 donation from an anonymous benefactor to support the digitization of 30 years worth of Salisbury Post articles.