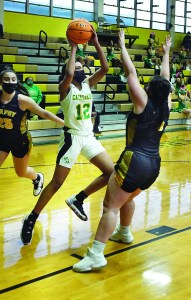 THOMASVILLE — North Rowan’s girls shook off an unusual week of postponements and schedule changes and romped 76-17 at Thomasville on Friday.

North had a 55-2 lead at halftime against the Bulldogs, who were playing their first game.

It was a successful Central Carolina Conference opener for the Cavaliers (5-1), who have won five straight since starting the season with a loss to Carson.

Bailee Goodlett stayed hot with 22 points and already has topped 20 four times. The sophomore had eight steals and four assists.

Senior Hannah Wilkerson scored in double figures for the fifth straight game. She had 13 points, six steals and eight assists.

It was the first action for North since a 74-35 win against Parkland on Monday.