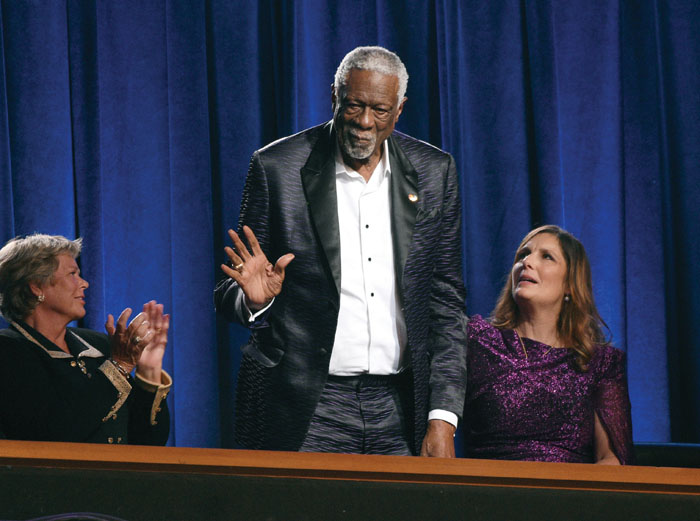 Bill Russell accepts the Arthur Ashe award for courage at the ESPY Awards in 2019, at the Microsoft Theater in Los Angeles. (File Photo by Chris Pizzello/ Invision/AP)

BOSTON (AP) — The jersey that Boston Celtics Hall of Famer Bill Russell wore for his final game — the 1969 NBA Finals clincher that earned him his 11th championship — sold for more than $1.1 million at an auction held Friday night at the TD Garden.

Other lots drawing spirited bidding included Russell’s first championship ring, which went for $705,000, and his 1956 Olympic gold medal, which sold for $587,500. Russell’s five NBA MVP trophies were also up for auction, with their combined sale prices topping $1.3 million.

The auction featured 429 lots accumulated by Russell over a career in which he won two NCAA titles, 11 NBA championships in 13 years and the 1956 Olympic gold medal. The top 18 items alone brought in more than $5.3 million.

Russell was also active in the civil rights movement, marching with Martin Luther King Jr. and standing with Muhammad Ali when he was stripped of his heavyweight title for refusing induction into the Vietnam War. A page from Russell’s scrapbook that included a signed letter from Jackie Robinson sold for $94,000.

The 87-year-old Russell has pledged some of the proceeds to MENTOR, which connects young people with advisers who can provide them with opportunities they might otherwise miss out on, and to the Boston Celtics United for Social Justice, which fights racial injustice and social inequities in the Greater Boston area.