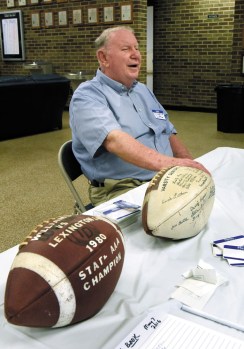 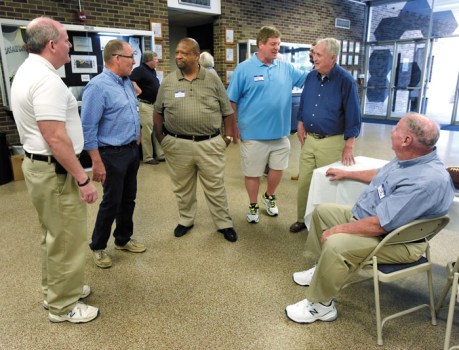 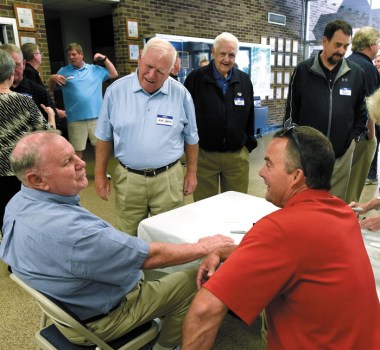 SALISBURY — Charles Eugene Little passed away from cancer at 79 on Dec. 3.

“Charlie” came south from Altoona, Pa., to play football for Catawba College. He graduated from high school in 1960 and debuted for the Catawba Indians that fall.

Catawba was an easy sell to muscular young Pennsylvanians. It was a way out of the steel mills and coal mines. Catawba meant green grass and blue skies, a sharp contrast to the smoke and ash of Pittsburgh and the towns, such as Altoona, surrounding it.

Catawba and Elon actually tied for the title, but the Indians rallied to beat Elon 12-7 on homecoming, with the Tangerine Bowl legends in attendance, so they’ve always rightfully claimed the championship. That 6-3 season included a win over Davidson to open it, and a satisfying “Bear Meat” shutout of Lenoir-Rhyne to finish it.

A Catawba Hall of Famer, Little, a 1964 graduate, would be notable for his role as a guard on those teams in the early 1960s, but his greatest fame would come from coaching.

Little and Pete Stout both played for Catawba, but Stout’s career preceded Little’s by a few years. They first encountered each other as coaching opponents — Stout’s powerful Western Alamance team against struggling Madison-Mayodan, where they’d recently lost 30 in a row. Little’s Madison-Mayodan defense almost pulled off an amazing upset. Stout wouldn’t forget that close call.

Marriage to Phyllis Hefner brought Little back to Salisbury and Boyden High, shortly before Stout was hired as head coach for the 1966 season and asked to turn around a program that hadn’t experienced a winning season since 1958. From 1960-65, Boyden had won 11 games.

Stout knew Little could take care of his defense if he would stay, and Little did agree to stay. The rest is history. They would form a dynamic tag team.

Stout’s formula for winning football games wasn’t complicated. He put together a good staff. He two-platooned, put his studs on defense and ran the ball.

Stout constructed a decade-long dynasty at Boyden High, which became Salisbury High in 1971. His record was  83-20-10, while competing one year in 4A and nine years in one of the toughest leagues ever. Little always was Stout’s strong right arm.

“The South Piedmont Conference was the best league ever,” Little said several years go. “Concord had great athletes and gave us the most trouble, but there were no nights off in the SPC. If you didn’t come to play, someone just tore your head off. One year in the Shrine Bowl, 13 of the 33 North Carolina players were from the SPC.”

Those Boyden/Salisbury teams were known for good offenses and great defenses.

The 1973 and 1974 teams won back-to-back title games with defensive-minded scores of 13-0 against Watauga and 14-3 against Shelby. Shelby was probably the greatest win of that era by Salisbury, as there always was a mystique about Shelby.

In those three championship seasons, Salisbury allowed an average of one touchdown  per game and posted 14 shutouts.

“We had a great staff — guys like Bob Patton, Aaron Neely, Bob Pharr, Charles Hellard — and we had very good kids,” Little said. “We had athletes with footspeed. Pete won a lot of track championships with those kids. If you were a football player and didn’t have a job, you were on the track team.”

The Hornets averaged less than 17 points per game in 1974 and still went 11-2. That’s serious defense.

“Great football players make good coaches,” Little said. “We had a linebacker in those days — Terry Beattie — who was 6-foot-3 and ran a 9.8 100. It was kind of hard to get away from him.”

Little’s defense of choice was the “wide tackle 6” — a six-man front that was nearly impossible to run against. Salisbury always put its best linemen on the defensive side of the ball, and those linemen shut down the great backs in the SPC.
The “wide tackle 6” sent a steady stream of Little-coached defensive linemen to the Shrine Bowl — James Teal, Steve Gribble, Robert Pulliam, John O’Neal, Danny Winecoff, Chuck Valley and Keith James — seven of them in a stretch of nine seasons.

When Stout was ready for the next challenge, Little went with him to Walter Williams High in Burlington, a place where Stout had started his coaching career as an assistant in 1959.

They were told often they couldn’t win with the “Country Club kids” at Williams. But Williams played for the state championship in 1978, coming up an inch or so short, and won state championships in 1980 and 1981. From 1979-82, Williams won 43 in a row. Stout and his staff were 71-12 in Burlington.

The next challenge was Catawba, where Stout became head coach and Little defensive coordinator. They took their best shot from 1983-86, and while the Indians didn’t win big, they did get better. There was a win against a nationally ranked Guilford team. The last college game for the Stout/Little duo was a win against rival Lenoir-Rhyne.

While football was his passion, Little also coached wrestling, track and field and golf during his long career and was Salisbury’s Teacher of the Year for 1972.

In later years. Little poured his heart and soul into Catawba. He was an avid supporter of the Indians and served two terms as Chiefs Club president.

“Football was a great thing when I came to Catawba and it still is,” Little once said “It provides opportunity. A lot of times athletes make opportunity pan out.”