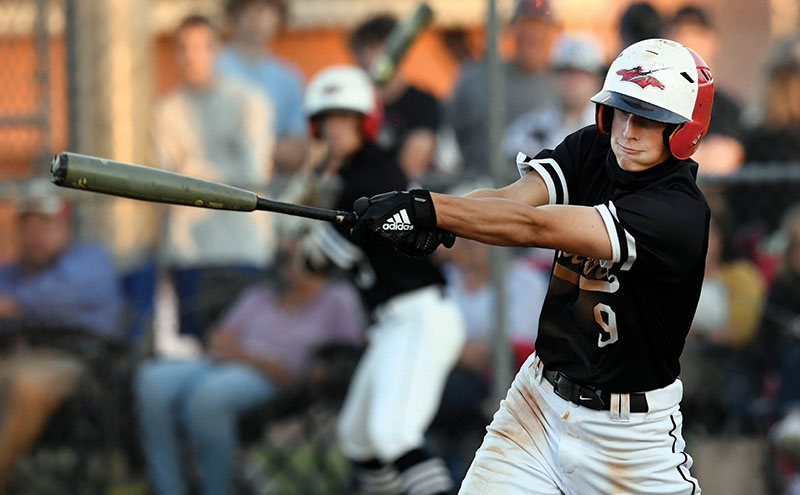 South’s Ty Hubbard is headed to Catawba next. File photo by Wayne Hinshaw, for the Salisbury Post

All-State as a junior, Hubbard has all the credentials to be a Division I baseball signee. He’s Jell-o smooth in the field, lethal at the plate for a middle infielder, and a lefty swinger to boot.

When you talk about the Raiders, the three senior studs at the top of their lineup are equally respected. They all won State Games gold medals.

For Hubbard, that Division I offer never materialized.

“It was a drawn-out recruiting process,” said Hubbard, who managed to stay upbeat. “I do know COVID changed a lot. Fewer coaches got to see me play. And then you’ve got that backlog on all the college rosters now since players were able to play that extra year.”

Not that Hubbard is moping around.  He has committed to Catawba College.

That’s obviously a win for him and for the Indians.

Wingate showed earlier this year that a South Atlantic Conference school can win a Division II national title, and the perennially nationally ranked Indians have been knocking on that door a very long time. When you throw in the proximity, and the opportunity for his family to see him play; and when you throw in Catawba head coach Jim Gantt, arguably the best of the best, and when you throw in a remodeled Newman Park, Catawba has an overload of pluses.

“When I went to visit Catawba and met with the staff, I got really excited about the opportunity to play there,” Hubbard said. “My dad (longtime Northwest Cabarrus High head coach Joe Hubbard) has known Coach Gantt a very long time and has great respect for him.”

“He’s got really good hands, really good timing, and is very skilled at turning the double play,” South head coach Thad Chrismon said. “He has excellent footwork and quickness, and he’s got a left side of the infield arm. If he gets bigger down the road, he could handle third base.”

Hubbard obviously was introduced to the game early by his father. Baseball is big in the Hubbard household. Ty’s brothers are named Cal and Brooks.

“He’s been on ball fields his whole life, and it shows,” Chrismon said. “He’s smart.”

Sometimes, on those ball fields, Hubbard has been able to take advantage of Northwest Cabarrus graduate Corey Seager’s trips back home from the majors. His father coached all three of the talented Seager brothers.

“That’s been helpful for me, getting to pick the brain a little bit of a great player like Corey,” Hubbard said. “Kyle and Justin were older and I didn’t know them as well, but I knew Corey.”

Maybe all you need to know about Hubbard is that All-State or not, he’s currently running indoor track, just trying to get a little faster for baseball.

The Hubbards live in China Grove. Ty has grown up playing with the guys from that area since he could tie his shoes.  His older brother, Cal, played at Northwest before moving on to Mars Hill College.

Hubbard batted .433 as  junior and was South’s leading hitter. He swung in an advantageous spot in the lineup behind Kepley and Chrismon and delivered a team-high 19 RBIs in a 14-4 season that ended in the third round of the 2A state playoffs.

“He’s just so clutch,” South head coach Thad Chrismon said. “He’s always in the cage, always working, and he’s developed a beautiful swing mechanism. He’s an extremely skilled hitter. He can pull, he can go oppo, and he can bunt. And I think in the spring, now that he’s filled out some, you’re going to see a lot more pop from him.”

Hubbard has been working on that.

“I’m stronger than I was last season and I’m swinging a little harder,” Hubbard said. “I’ve always hit the ball where it’s pitched, used the whole field, just shooting it over the heads of the infielders, but I am looking forward to driving more balls this year.”

Hubbard was 26-for-60 last season, with two doubles and 24 singles.

South can use more extra-base knocks this season. The South Piedmont Conference will be a stout, eight-team baseball league that includes four Rowan schools, Lake Norman Charter and three Cabarrus schools. One of those Cabarrus schools is Northwest.

Some Raiders will be circling East Rowan on the calendar, while others will be looking forward to Carson.

But for Ty Hubbard, the two biggest games will be against Northwest Cabarrus, his father’s team.

That’s going to be an interesting dynamic. Lots of athletes play for their fathers, but not many get to play against them.

“It definitely will be different, being on the opposite side from him,” Ty said. “But I’m looking forward to it. Especially the game at Northwest. That’s the field I grew up on.”