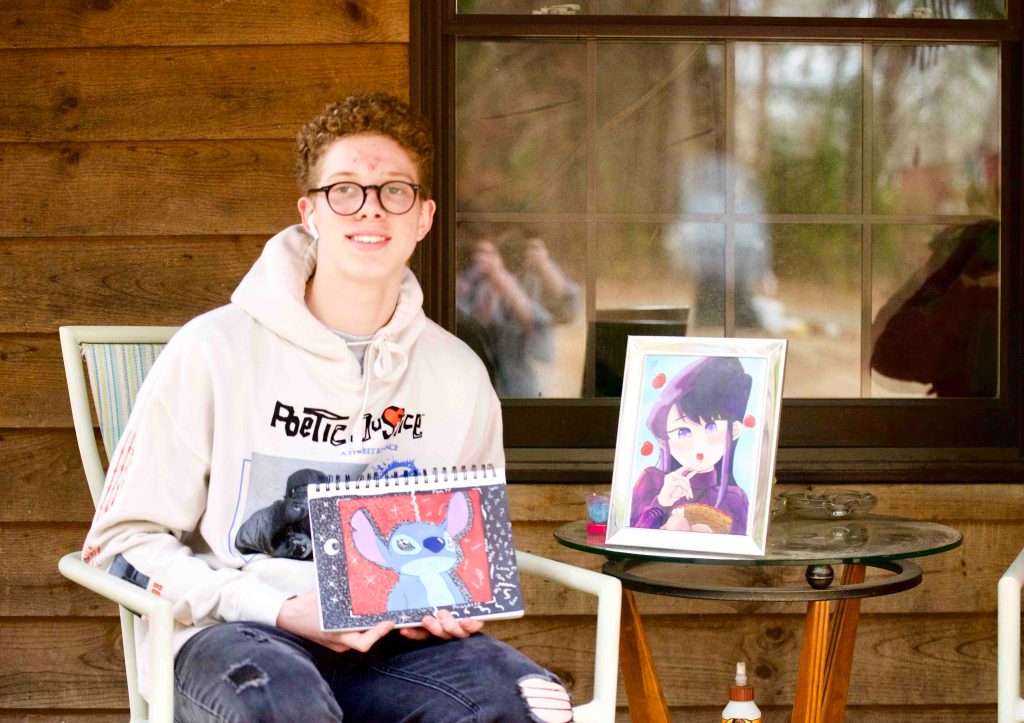 Carl Blankenship/Salisbury Post - Jasiah Lackey posing with a couple of his pieces.

SALISBURY — Jasiah Lackey loves to draw and has been doing it constantly for most of his life.

The Salisbury High School sophomore’s favorite subjects are characters from cartoons and anime — from American animation characters to Japanese classics. His love of drawing started with “Jurassic Park” at about 4.

While he’s hoping to to become a professional artist, Jasiah has a challenge surprising for someone whose passion is visual art: he’s legally blind.

Born with an eye condition, Jasiah, 16, can’t see past his hand without glasses. He has problems with depth perception and his ability to see far away objects is nonexistent. Jasiah’s eye condition also means he can’t drive. His mom, Christi Lackey, also says she was told his vision would make it difficult for him to work.

But his art tells a different story.

“Just look at his artwork,” Christi said. “How is he able to do this?”

She said her son started getting pretty good when he was about 7. She recalled a tattoo artist wanting to hire Jasiah to make sketches when he watched him draw a megalodon. Christi didn’t take the tattoo artist up on the offer to put her elementary school student to work, but she knew he had talent.

Jasiah spent time with a family member each summer who took him to art galleries, contests and encouraged him as well.

He gets his ideas for his next pieces from all over. Sometimes he sees something inspiring on social media. Other times, it’s a show at home or recommendations from people he knows.

“I’m still not amazing, but I can see the improvement, that I’m growing over the years,” Jasiah said.

When he’s not sure how the art looks, the high schooler turns to friends for a second opinion.

“If the eyes look bad, the whole drawing is going to look disproportionate,” he said.

He said the amount of time he spends on a piece can run anywhere from five minutes to seven hours; it depends on what he is drawing. A piece with a lot of color and shading will typically take longer to finish.

“To me, none of my drawings are complete,” Jasiah said. “There’s always some detail that I can add on to or anything I could look at to learn from in the future.”

It is a good thing to judge your work, Jasiah said, though sometimes he can be hard on himself.

“I go on Pinterest sometimes or I’ll look at something inside the house. Sometimes, also I’ll get people to recommend things for me to do — could really be anybody honestly,” he said. “My way of thinking about it is nothing is ever complete because it could always be better. I definitely feel like it’s a good thing to judge yourself like that.”

Jasiah said some people may laugh at the idea of him doing this for a living, but others, including former teacher Caitlin Canada, work with him to make it possible.

Canada, a Knox Middle School teacher, said she tries to keep up with all of her students, and that Jasiah is one of a core group of students she’s formed a relationship with.

“As far as his vision, that never held him back,” Canada said. “He was always such a strong advocate for himself.”

Canada said drawing was a motivator for Jasiah. He would try to finish his work quickly enough to have time left over to draw. He still sends her drawings from his sketchbook.

“He said his last piece took him seven hours,” Canada said. “Just to see that focus, I was so happy.”

Jasiah says he’s interested in design and fine art, too. In addition to cartoons, he’s dabbled in realism — something he’s thinking about getting back into.

Jasiah said his vision makes school more difficult, too. At school, he uses a machine to magnify what is happening in the front of the classroom that he’s not particularly fond of. He uses his iPad heavily because it allows him to magnify his work as needed.

His vision has not kept him from being part of the school’s JROTC program or running track. He said running is not an issue, though he has had to get used to passing the baton when he is the starter on a relay.