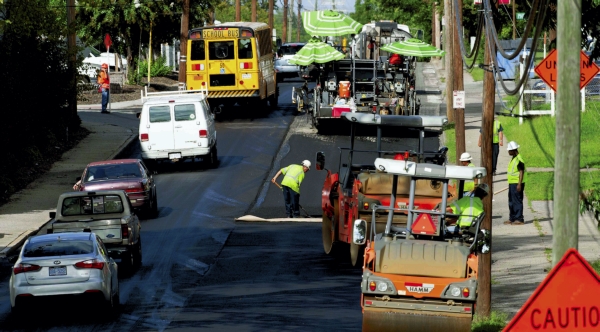 SALISBURY — Beginning in the spring, the city will pave or resurface more than a dozen streets.

The city each year uses Powell Bill revenue from the state to resurface and maintain city streets. Powell Bill revenue is allocated based on population and the total mileage of city-maintained streets. From four bids received, the city selected the lowest, from NJR Group Inc. based in Stanly County, and will pay $533,925. NJR Group was also contracted to repave streets during the 2020-21 fiscal year. Other bids came from J.T. Russell and Sons in Stanly County, Hanes Paving Co. in Lexington and Carolina Siteworks based in China Grove.

A total of $858,000 in Powell Bill revenues was allocated in the 2021-22 fiscal year budget. Though paving wouldn’t begin until the spring when the weather is warm enough, Public Works Director Craig Powers said he sought council approval this week to allow some wiggle room toward the end of the fiscal year in June if more funds are needed for street maintenance.

The following streets in Salisbury will be resurfaced between January and May:

• Moyle Avenue from Faith Road to the cul de sac.

• Montgomery Avenue from the dead end to Suggs Avenue.

• Ludwick Avenue from the dead end to Crown Point Drive.

• Clover Street from Carolina Boulevard to the dead end.

Powers said the city uses a variety of input to determine which streets will be paved each year, including those with the most complaints, streets that appear to be most in need and proximity to other streets in need of maintenance.

While the selected streets are spread across the city, Powers said some areas, such as the Morlan Park area, are worse than others. So, staff try to pave as many streets in the area as they can while they have the equipment in that neighborhood and to “stretch our dollars out.”

During Tuesday’s city council meeting, City Manager Lane Bailey said city staff anticipate bringing before council members early next year a measure to tweak some of the city’s design standards to avoid maintenance of some streets in newer developments as often. Bailey said those tweaks can cut down on the costs of maintenance, which is ultimately on the taxpayer’s dime.