CIS, The Konnected Foundation partner to give hundreds of toys to local kids 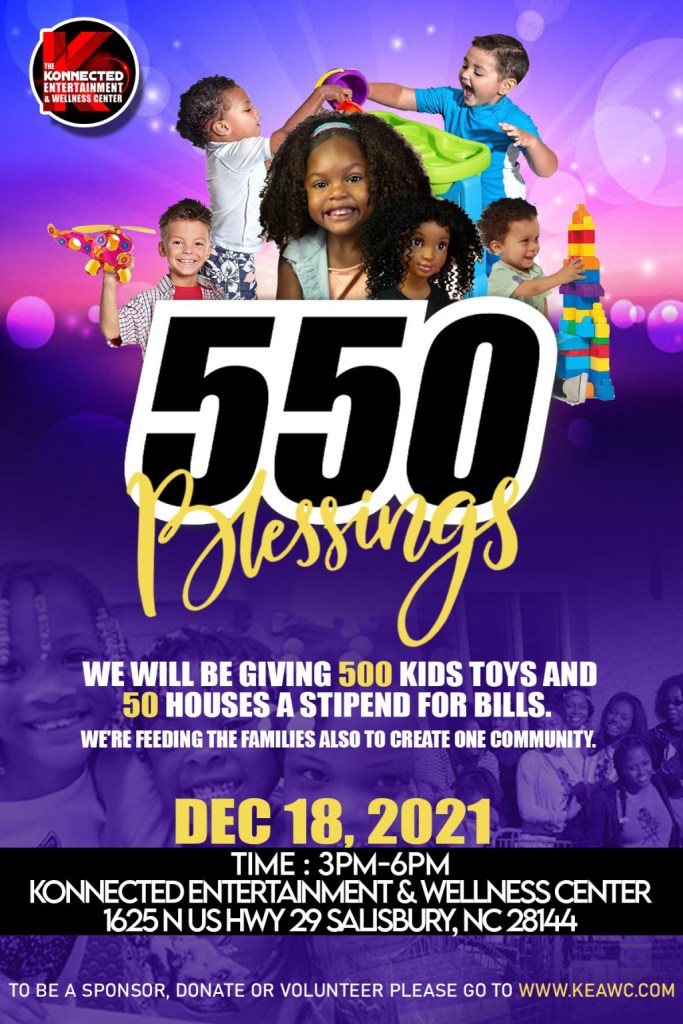 SPENCER – Two local nonprofits are teaming up to bring people together, spread some holiday cheer and offer financial assistance this month.

The event, dubbed 550 Blessings, is looking to give away 500 gifts to local kids and 50 stipends for households. The event is a partnership between Communities in Schools Rowan and The Konnected Foundation. CIS is identifying families to participate and the foundation will host a get together and distribution at its Spencer facility on Dec. 18.

Foundation Executive Director Kevan Glover said his organization provides scholarships and classes on contemporary media skills like videography, deejaying and photography. The foundation tries to keep kids in school and help them keep their grades up. The training programs are incentives.

The giveaway is the first of what the organizations hope to make an annual event, and it will be more than a give away. Glover said the foundation will bring out Santa, The Grinch, some games for kids, a DJ and feed everyone a meal.

“It’s not just a come in and leave situation,” Glover said, adding the goal is for the event to have a personal touch and see the families benefit.

CIS Rowan Executive Director James Davis said his organization works with more than 3,800 students at its Rowan-Salisbury Schools locations. The site coordinators at each school have begun identifying families to participate.

“We’re not just identifying a kid at the school, but the sibling, next of kin, at the schools for those connections,” Davis said.

Families fill out some forms to participate, and Davis said the program has been opened up to families outside of the eight schools it serves.

Davis said the event will bring together families who may feel they are struggling on their own.

“We just say ‘hey, we felt like your kid was a good kid,'” Davis said, “Some of the kids that we have are just good kids that may be getting fits, but might not be getting a lot because it’s a big family. We felt like when we talked to them, hey we’ve got a bunch of kids that we found that sometimes fall through the cracks.”

Glover said the organizations will give away more than 500 toys if it receives a flood of donations. Davis said the number gives the organization a good goal for the first year that will allow it to reach younger students all the way up to high school students. The gifts that have been collected so far are just about anything a kid could want.

“Some of them get left out,” Davis said, adding sometimes older students feel like they have aged out of benefiting from programs like this.

Glover said he just likes to see kids be happy and his work with the foundation followed his work as a club promoter unexpectedly.

Glover’s wife asked him to sponsor a student whose family did not have enough money for a dance class. He did, and how tight the girl hugged him when he met her shocked him.

“That feeling was something I couldn’t explain,” Glover said, adding that meeting was the inspiration to make some changes and make an impact on kids.

A number has not been set for the stipends. Glover said the amount depends on what has been raised.

The event is actively looking for donations which can be made at keawc.com. Toys can be donated at CIS in the Gateway Center as well.