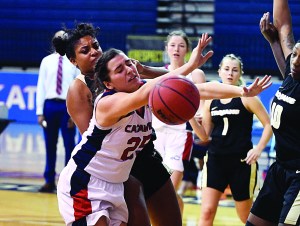 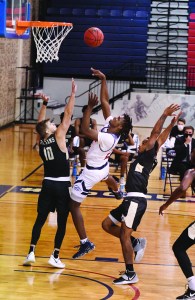 Sara McIntosh led Catawba, scoring a career-high 27 points on 10-of-14 shooting. She was   7-for-7 at the line and grabbed five rebounds. Lyrik  Thorne added 14 points and four steals, while Janiya Downs had 12 points and eight rebounds. Shemya Stanback pulled down 12 rebounds to go with nine points and five steals.

Catawba trailed 34-26 at the half, but shot 64 percent in the third quarter.

Limestone got 17 points from Reagan Kargo, who canned 4-of-5 from long range. Kalisha Hill produced a double-double of 16 points and 10 boards with Quin Byrd picking up 14 points and handing out six assists.

Catawba is at home on Saturday, hosting Lenoir-Rhyne at 2 p.m.

North Rowan’s home games with West Rowan (Wednesday) and South Davidson (Friday) have been postponed, and the Cavaliers are working on new dates for those games.

Caleb Robinson scored a career-best 42 points for the Indians, hitting on 16-of-19 shots and 9-of-13 free throws. He posted 10 rebounds and tallied 28 of his points after the first half. The 42 points are the ninth most in a game for an Indian. He joins just three others to reach 40 points in a game.

The Saints scored the final baskets of both regulation and the first overtime before Catawba would prevail after 50 minutes of action. Limestone erased a 91-87 deficit and took the lead at 92-91 on a three-pointer by Ayden Hickman with two minutes left. Catawba responded with the next nine points.

Trevion Lamar followed with 24 points, nine rebounds and eight assists for the Indians. Myles Washington finished with 12 points, with nine coming in the overtime periods.

Limestone was led by Ayo Dada’s 35 points, hitting on 13-of-26 shots. Isayah Owens canned 24 points and Hickman added a dozen. The Saints hit on 15 three-pointers in the loss, making 41% from long range.

Catawba shot 60 percent for the game to 45 percent  for Limestone.

Catawba is in action at home on Saturday, hosting Lenoir-Rhyne at 4 p.m. following the women’s contest.

Teyatcha Harris had 16 points and 20 rebounds for the Mustangs.

“We kept our heads in the game, stayed focus and overcame a lot of adversity to win this one,” East coach  Andrew Porter said.

West Rowan’s standout left-hander Casey Gouge has de-committed from Navy and will be part of Catawba’s recruiting class.

Mariah Barrie had 23 points and 11 rebounds to lead Central Cabarrus’ girls basketball team to a 55-25 win against A.L. Brown.

Mackenzie Chabala scored 13 for the Raiders.

Mary Spry had 22 points and 12 rebounds, her third straight game with 20-plus points.

Only four Cougars scored, but they were able to hold off a third-quarter surge by the Falcons.

East Rowan’s girls cruised to a 63-19 win against Concord. Eleven girls scored for the Mustangs, led by Clara Beaver’s 11 and Peyton Whicker’s 10.

GRANITE QUARRY — Dylan Valley score 25 points, but East Rowan was blown out 86-45 by Concord on Tuesday in the South Piedmont Conference.

Teyatcha Harris scored 10 for the Mustangs.

CHINA GROVE — West Rowan built a big lead and held off Carson 62-54 in the SPC on Tuesday.

Matthew Connolly scored 11 for the Falcons, while William Givens had 10.

Carson got 14 from Jay Howard. Cam Burleyson and Mikey Beasley scored 12 each, while Emory Taylor added 11.

The Salisbury Elks Lodge No. 699 and Salisbury Parks and Recreation will host the annual Hoop Shoot Free Throw contest on Sunday, January 9 at Hall Gym, 1400-B West Bank St. in Salisbury.

Participants should arrive at 1:30 for the 2 p.m. contest. Top finishers in each of the six divisions advance to district competition on Saturday, Jan. 22 in Winston Salem.

Trophies will be awarded for first and second place winners.

First place with a minus-22  was the team of Bobby Clark, Ralph Luther, Scott Luther and Winsten  Mahaffey.

Second place with a minus-21 was the team of Bob Turner, Carl Moore, Gary Schenk and Mel Smith.

Third place with a minus 20 was the team of Bernard Caldwell, Franklin Ford, Red McClain and Tommy Ellis.

Closest to the pin on No. 2 was Phil Cauble. McClain had longest putt on No. 9.

Eight eagles were made.