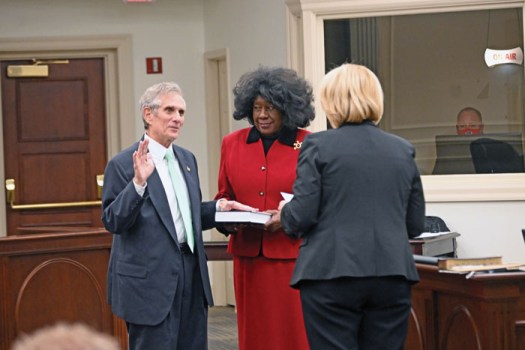 Natalie Anderson/Salisbury Post — Council member David Post was joined by Deedee Wright Tuesday while being adminstered his oath of office with the Salisbury City Council. 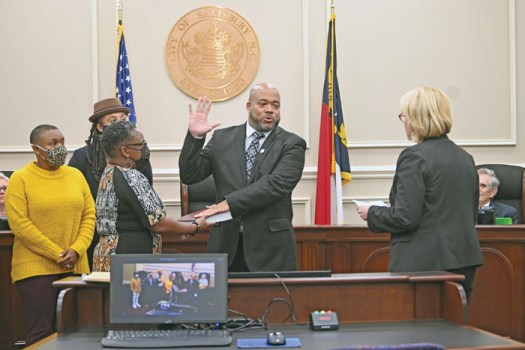 Natalie Anderson/Salisbury Post — Mission House Pastor Anthony Smith was joined by loved ones Tuesday when he was adminstered the oath of office for the Salisbury City Council. 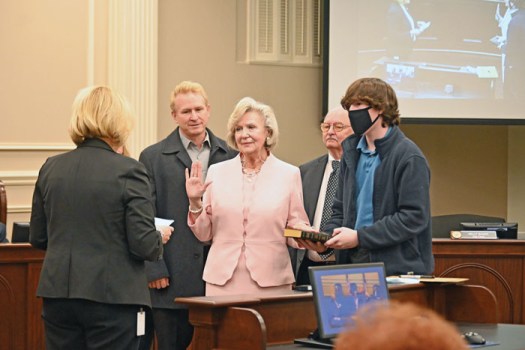 Natalie Anderson/Salisbury Post — Mayor Karen Alexander was joined by loved ones Tuesday when being adminstered the oath of office to the Salisbury City Council as mayor. 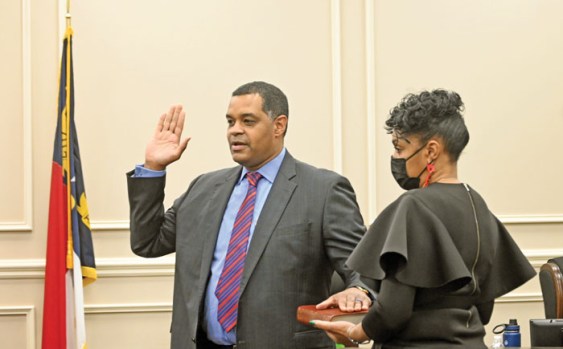 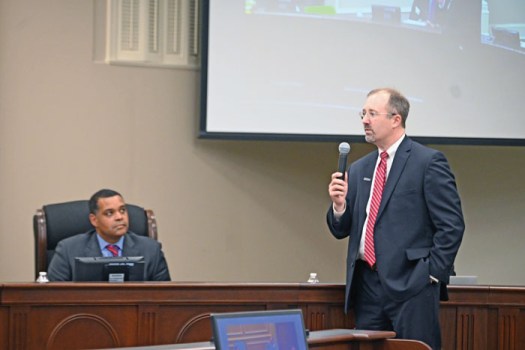 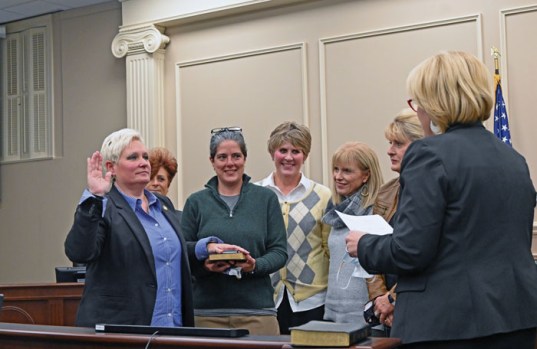 Natalie Anderson/Salisbury Post — Tamara Sheffield was sworn in as mayor pro tem Tuesday night after receiving the most votes of all council members in the 2021 election. Sheffield is the first known openly gay council member to serve in such capacity.

SALISBURY — Applause and standing ovations filled a packed Salisbury City Council chamber as a historic new group was sworn in and longtime member Brian Miller participated in his last meeting.

Tuesday marks the first time two people of color will serve together on the City Council. They are Mission House Pastor Anthony Smith and McLaughlin’s Grocery Store owner Harry McLaughlin, both Black men. Additionally, the new council unanimously voted to appoint Tamara Sheffield as mayor pro tem. That’s another first because she is the first openly gay woman to serve as mayor pro tem. Council member David Post made the formal nomination.

Smith said he could “feel the weight” of the historic council makeup Tuesday and that it’s indicative of “how the needle is moving” in the community.

McLaughlin said he’s witnessed animosity throughout other campaigns he’s worked with, but he doesn’t feel that was the case in the recent city elections. Post said this year’s election was civil and he discussed a few items he’d like to work with the council on, including improvements to the transportation system, the KIVA program for minority and women entrepreneurs and more involvement in Rowan-Salisbury Schools.

Before the new council was sworn in, Mayor Karen Alexander presented Miller with a resolution of appreciation, a painting of Bell Tower Green Park and a key to the city. Alexander said in the resolution Miller has earned the admiration and respect of citizens, council members and city staff for his “ability to see the possibilities.” Miller was first elected to council in 2009, helped the city establish its land development ordinance after time on the planning board and was an original member of the bank coalition that purchased the Empire Hotel, Alexander said.

Miller was emotional when thanking his wife for her support throughout his 12 years of service doing a job he loved doing despite missed on his children’s basketball and volleyball games. His message for the new council was to spend the next few months getting to know each other as people first before they begin making decisions together because disagreements are inevitable. He also encouraged members to come prepared to each meeting to make a decision but be open to discussions and different perspectives.

“This community is better when you five are in alignment,” Miller said. “And I will challenge you to find that every time you can.”

To the outgoing council, Miller said they “are friends first” and he’ll miss the work council does — except the four-hour meetings.

Sheffield praised Miller as “a perpetual Boy Scout, which means he has the best heart.” Sheffield said she anticipated the two would be really far apart in perspectives, but they aligned more often than most other council members.

Post referenced Miller’s catchphrase of “you had me at hello” in response to big city projects that come before the council. Post praised Miller as a mentor and for providing “the intellectual infrastructure” when Post was first elected in 2015. Post said Miller had a skill at “cutting to the chase” and getting at the heart of the issue.

Alexander said she regretted she couldn’t “twist his arm out of socket” once more to run again, but she appreciated his ability to rein in a council of differing perspectives to stay focused on the main issue.

Smith said he’s always appreciated Miller’s ability to listen and remain open, and that he’s always believed Miller to be a man of integrity.

McLaughlin said about a week after he won the election he had the opportunity to “break bread” with Miller over a meal to discuss what he should expect.

Al Heggins, who served as mayor pro tem on the outgoing city council and challenged Alexander in the mayor’s race, was not present due to a family medical emergency. Alexander read a resolution of appreciation for Heggins’ time on the council, highlighting her “heartfelt desire” to help the community and sparking a “renewed hope for the community.” The resolution spoke to Heggins’ history as the first Black woman elected to council and then mayor, and her passion to provide a voice for those who aren’t always heard or engaged with local government.

Alexander said in the resolution that Heggins championed inclusion and equity, was key in the city’s resolution of reconciliation, brought Salisbury to the national stage with a visit from White House officials in 2019 to discuss opportunity zones and understood the importance of living wages for city workers and frontline workers.

Tuesday’s meeting was also the last for City Manager Lane Bailey, who was first hired in 2015. Bailey announced retirement earlier this year, with Dec. 31 as his final day. Brian Hiatt, the former city manager of Concord, will assume the interim role as the council works to hire a new, permanent manager. Hiatt is expected to begin the 2022-23 budget planning process.

The city of Salisbury also named Hiatt its interim planning director in 2018 until Hannah Jacobson was selected in April 2019.

Bailey had a similar message for council to work together and find common ground. Bailey said the city’s ongoing salary study and hiring issues within the Salisbury Police Department will be among the most challenging tasks for the new council. But like Miller, Bailey said he’ll be watching and is excited about the city’s future. He and his family will also remain in Salisbury, which he called his home.

Sheffield said she’ll miss seeing Bailey’s fun socks, and she appreciates his skill in building a cohesive team that makes all of the city better.

McLaughlin said in his experience of frequently meeting with city leaders, Bailey might be the only manager he’s never heard anything negative about.

Smith said he appreciated Bailey for his willingness to listen and be reasonable, and in particular, his being  inclusive while analyzing multiple perspectives in the hiring of Salisbury Police Chief Jerry Stokes.

Post said he appreciated Bailey’s diligence in working on Fibrant issues and that he never witnessed Bailey break a sweat or let out a sigh of relief despite “always going.” He joked about not being able to figure out Bailey’s “easy 17-step system” to keep the city’s business organized and detailed.