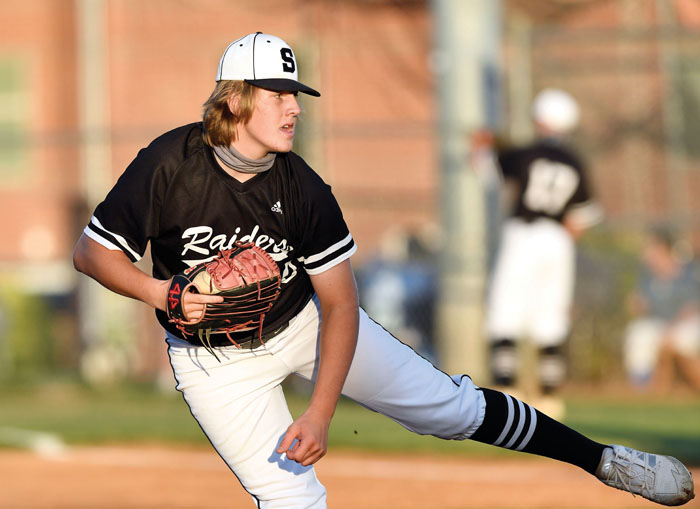 LANDIS — South Rowan junior southpaw Haiden Leffew was clocked at 90 mph at a recent Wake Forest camp, so the baseball journey for him may just be getting started.

Leffew, listed at 6-foot-2, 210 pounds, was one of the keys to South’s postseason run last June as a sophomore. He announced a comittment to the Demon Deacons baseball program over the weekend.

South head coach Thad Chrismon predicted Leffew would be an early Division I commit even before he’d pitched his first varsity game for the Raiders.

“He’s got great stuff, with great movement, and that movement is the key for him,” Chrismon said. “He’s got all kinds of physical tools, but he’s also a grinder, constantly working to get better.”

Leffew’s stock skyrocketed during a fall tournament with the South Charlotte Panthers showcase organization. The Panthers traveled to Florida to compete in the Perfect Game Underclass World Championships. In Leffew’s first outing, he was part of a combined no-hitter and a near perfect game.

His second outing was even more significant.

“I was pitching against Trosky National from California, a team people were writing articles about,” Leffew said. “They had an Oregon commit, a UCLA commit, a Fresno State commit. I was on three days rest and I had nothing to lose. I had the mindset that those guys had come all the way to Florida to lose to the South Charlotte Panthers.”

Leffew worked into the sixth inning with a four-pitch mix of fastballs, curveballs, changeups and sliders. South Charlotte won the game. Leffew remembers striking out two sluggers to strand a runner at third base. The second one sat down after a 3-and-2 changeup. Wake Forest coaches were in the audience.

“Not long after that, I got a text from (South Charlotte coach) Scott Clemons, and he said Wake Forest wanted to talk to me,” Leffew said. “It had never crossed my mind that I might go to Wake Forest.”

That was two months ago. Wake Forest showed Leffew a lot of love in October and November.

“They had unique recruiting methods,” Leffew said. “They gave me homework assignments. It was really cool.”

He was invited to tour Wake Forest’s facilities and throw at a camp. That’s when he hit 90 on the radar gun, and like a lot of lefties, his fastball is a runner, not a straight one. He was topping out at about 83 mph a year ago and at 87 during the fall season.

When Wake Forest offered a scholarship, Leffew didn’t have to ponder the decision long.

“That’s a program that’s heavily into analytics, and Haiden is just going to eat that stuff up and continue to grow as a pitcher,” Chrismon said.

Leffew started baseball at age 4 in Landis and was hooked on the sport quickly. He progressed through several youth leagues to travel baseball with the Lake Norman Copperheads, and then the South Charlotte Panthers.

He made an impressive debut for South Rowan at Carson on April 30, South’s second game of a late-starting season.

“It was weird,” Leffew said. “My first big game, the stands are packed, and I’m facing Carson, our biggest rival. Seeing all those fans made me want it that much more.”

He shut out the Cougars until the sixth. South won big.

“But I threw a lot of pitches for the first game,” Leffew said. “I had a little tendinitis after that.”

He was out three weeks. He would have been on the mound against Oak Grove, but he missed that start. Oak Grove won 9-6 at South.

“They talked smack to us,” Leffew said. “I didn’t forget.”

Leffew returned to the mound for a critical Central Carolina Conference game on May 21 at North Davidson. The Black Knights won 6-1.

“First game back and not my best,” Leffew said.

But the main thing was that he was healthy.

Chrismon handed him the ball again at Ledford six days later, with South’s season on the line. That 14-3 romp was the turning point in what would mushroom into a nine-game winning streak and a stellar season. Leffew not only got the win at Ledford, he launched a two-run homer.

“He competes,” Chrismon said. “The bigger the game, the more he wants the ball. Every coach wants to coach the kids like that.”

When South played Oak Grove again in the CCC tournament semifinals on June 9, Leffew was as pumped up for a start as he’s ever been. He allowed two hits and no runs and struck out 10 Grizzlies in five innings.

After South won its first conference tournament championship since 2003, Leffew pitched in the opening round of the 2A state playoffs at West Stanly.

He had to battle in that one, striking out seven and walking five before being relieved in the sixth. But he held the high-scoring Colts to one hit.

“They had a big hitter (Connor Tucker) that I threw nothing but cutters to,” Leffew said. “I just wanted to win, wanted to get my team to the second round.”

After reaching the third round of the playoffs last June, South, led by Division I signees Nathan Chrismon (East Carolina) and Kane Kepley (Liberty) and Catawba commit Ty Hubbard, makes the move up from 2A to 3A and will part of a stout South Piedmont Conference. South will have home-and-home league battles against rivals Carson, East Rowan and West Rowan.

Leffew has dangerous power and will swing the bat some, but mostly the Raiders will count on him to slam the door on opposing offenses with his pitching arsenal and his competitive spirit.

“The goal for my junior season is more strikes, to stay in ballgames longer,” Leffew said. “I want to be that guy that gives us at least six innings every time out.”

Coach Chrismon was glad to hear that, but he also chuckled.

“I know he’s going to try hard to pitch to early contact, but it’s just not that easy for him,” Chrismon said. “His ball moves so much. There are always going to be a lot of swings and misses.”