Submitted by his granddaughter, Taylor

He just turned 92, lives alone, he drives, he is an extremely active part of the Rowan County Veteran’s Honor Guard, playing taps in the funerals. He worked to get the Honor Guard as well as the local VFW a defibrillator & brought in someone that works EMS to come and teach them how to use it. He still has such a sharp mind & can tell you down to the second how long he was married to his wife, which we as grandchildren lovingly called “Nana”.

He was with the Salisbury Police Department very many moons ago & also retired from the NC Finishing Company. He did not know what to do with himself, so he went back to work at the then Rowan Regional Memorial Hospital working security. When he retired the final time, he was in his 80’s.

When people ask what his secret is to such a long, healthy life, we truly do not know. He is such a fun person to be around, we love him dearly & everybody that knows him, shares that love for him as well. He has attended multiple funerals for veterans where there were little to no family, but for their brothers and sisters in arms, the Honor Guard has been there, sacrificing their time & effort to make sure they have a proper burial and someone is there to say goodbye.

To submit a veteran, please visit this page. 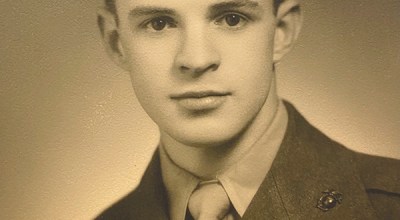