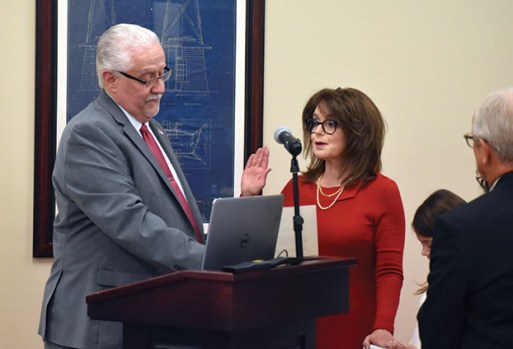 Cheryl Sheets is sworn in to her first term on the China Grove Town Council by Sen. Carl Ford. Ben Stansell/Salisbury Post 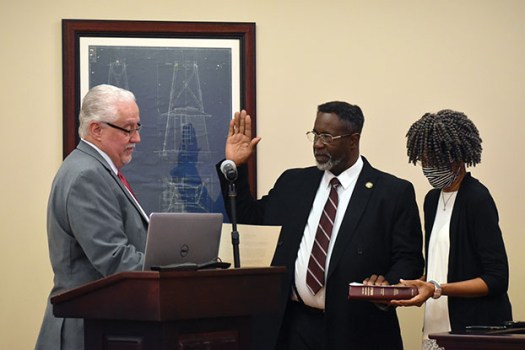 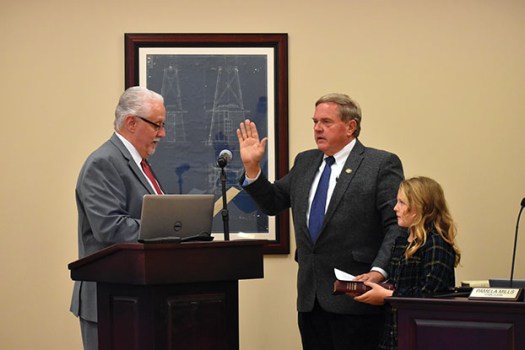 CHINA GROVE — New and newly re-elected members of the China Grove Town Council were sworn in Tuesday at Town Hall.

Sheets will be serving her first term on the council after unseating incumbent Brandon Linn. Heggins, who was also elected mayor pro-tem by fellow council members on Tuesday, will serve his second term. Heggins was the leading vote-getter in the November election. Bringle was elected after finishing the two years left on Mayor Charles Seaford’s term, but he’s served as the town’s mayor and councilman prior to that.

Before Sheets was sworn in, the council recognized Linn, who served on the council for three terms. Seaford presented Linn with a framed certificate recognizing his service to the town.

“Over the past 12 years, it’s been an honor to serve the citizens of China Grove as a councilman,” Linn said. “Over these 12 years, we have been blessed to make progress to better the beautification of this town. We have worked tirelessly to help reduce the citizens’ water bills, we’ve hired a well-sounded town manager and voted to increase growth in the residential community and business growth.”

The council also recognized Tom Brooke, who has served as China Grove’s legal counsel for the previous 36 years. Brooke has kept the position as the council and mayor have changed over the years. Seaford presented Brooke with a red China Grove T-shirt and a framed certificate.