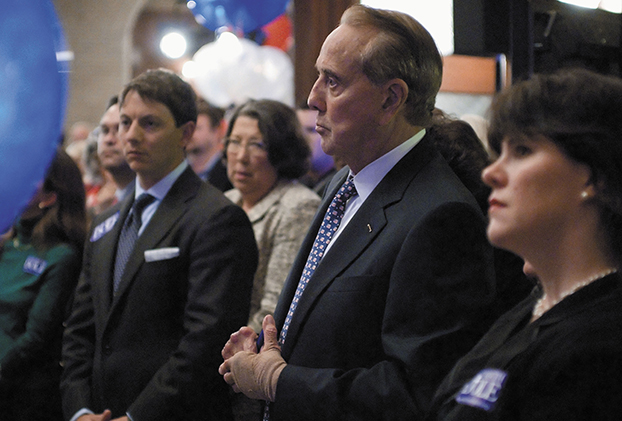 Senator Bob Dole was a hero of World War II, a statesman, an advocate for fellow veterans, a father and husband. He considered Salisbury his adopted hometown, and his brothers and sisters here are in mourning.

Dole died Sunday at the age of 98, truly one of the greatest of the Greatest Generation.

In 1975, the dashing senator — he’d serve for 27 years — married Elizabeth Hanford, a graduate of Duke University, Harvard Law and a member of Phi Beta Kappa who was fashioning her own political career in Washington, D.C. She served as secretary of transportation under President Ronald Reagan and Secretary of Labor under President George H.W. Bush. Together, they were a Washington power couple for decades. Since 2012, she has led the foundation that bears her name, providing support to military families, the “hidden heroes.”

She is a member of that group.

At 20, Dole was grievously wounded in Italy. His fellow soldiers left him for dead, but the Kansas native would fight his way back to health. Although he didn’t die, his dreams of becoming a medical doctor did. Instead, he pursued a career in public service.

And he never let his limitations stop him.

In their 1988 book, “Unlimited Partners,” which the Doles co-authored, Elizabeth Dole wrote of her soon-to-be husband: “He was also straightforward and absolutely honest. On a visit to my parents in Salisbury, he appeared one morning in the kitchen with a towel draped over his right shoulder. ‘Mrs. Hanford,’ he told my mother, ‘I think you ought to see my problem.’ ‘That’s not a problem, Bob,’ she told him. ‘That’s a badge of honor.’”

Terry Osborne was brought to tears with the news of Dole’s death. The two met when Osborne was chair of the Young Republicans in 1975 and Dole came to speak at Catawba College. He gave Dole a ride back to the Hanford home.

“He took the time to show the students around,” Osborne said. “He took all the time in the world with them.”

Elizabeth Hanford and Charlie Walters were high-school classmates. He later lived next door to her mother.

“I was a year ahead of Liddy,” he said. “I knew her well in school and we were friends. We got to know Bob in a little different way than most people (because of being next-door neighbors to his mother-in-law). He was a people person. He was very friendly and called you by your first name. He wanted to know about you.”

Walters remembered that once Dole locked himself out of the house when Elizabeth Dole and her mother were out. Several times, Dole also visited with Walters’ wife, Susie, at the clothesline.

“He was very down-to-earth,” he said.

Margaret Kluttz, a former Salisbury mayor, said she always followed Elizabeth Dole over the years. Her local friends know her as “Liddy.”

“She was a local, homegrown success story that everybody knew about,” Kluttz said. “When George and I were married, Liddy’s mom and dad lived down the street. Our paths started crossing from time to time, which was exciting and fun.”

It was the same when Kluttz became mayor.

Kluttz remembered seeing Dole at Innes Street Drug’s location at Ketner Center around the time the two were engaged.

“He was so tall and handsome,” Kluttz said. “He may have seemed stiff on television, but he was warm and funny in person. He was a tough leader and a staunch Republican. He was honorable and hammered out meaningful compromise. He was tough, but he could get the deal done.”

She added, “He adopted Salisbury because of Liddy. I know they’ve done so much quietly for people in need here.”

“I had the honor of serving an an intern for Bob Dole in January of 1989,” Dees said. “I was 17 years old. I had known Sen. Dole for most of my life, but it was such a privilege to see him in action. He commanded a room like no one I have ever seen and had a quick wit and humor I remembering being surprised by. I spent my time in his office in constant awe.

“To say he was a great American is an understatement. Bob Dole exemplified the Greatest Generation and was a real-life hero. He was my hero and I was so blessed to call him my friend. His sacrifice, service and love for our country is an inspiration — not only for me but for our entire country. I will miss him, but will always appreciate the important role he played in the history of our country.”

Brenda Zimmerman has raised Schnauzers for the Doles.

“I know this has been so hard on Liddy,” Zimmerman said. “As Bob’s abilities were changing, he still went to the World War II memorial as often as he could to meet veterans. He had a dignity about him. He’s not from the South, but he’s the epitome of a Southern gentleman.”

Zimmerman was one of the many people Dole called during the pandemic. He called her after last Christmas just to check in on her.

He told her, “I’m just calling some of the folks I know who are single and all cooped up.”

The two ended up talking for about 15 minutes, Zimmerman said.

“I thought that was the sweetest thing in the world,” she said.

Stewart McLarin is president of the White House Historical Association. At the Red Cross, he served as Elizabeth Dole’s chief of staff for six years. She led that organization for eight years.

After McLarin’s father died in January, both Doles called to check on him.

“He was extremely thoughtful,” McLarin said. “I always found him to be a kind, thoughtful person. The Doles truly cared for each other. They had a romantic relationship.”

Of course, politicians host many events, and the Doles were no different — but with a Southern twist.

“I got to know the Doles when she was secretary of transportation,” said Gary Ritchie, owner of Gary’s Bar-B-Cue in China Grove. “I did catering at Goodman Gym for them for 4,000 people. We had a huge crowd.”

Bob was a “real gentleman,” he said.

“They came down every Christmas,” Ritchie recalled. “He’d always ask me, ‘Do you know any needy families we could take some barbecue to?’ He would pick it up on Christmas Eve — three shoulders with all the trimmings. He just did it because he wanted to do something for somebody for Christmas.”

Ritchie said that Hanford, her son John and daughter-in-law Bunny, and the Doles often visited Gary’s together.

“When they wanted barbecue, I’d put it on the train or ship it UPS,” Ritchie said. “It worked out pretty good. They are top-notch people.”

Perhaps Dole’s most lasting legacy is the World War II memorial in Washington, D.C., for which he was chairman. The memorial, McLarin said, would not have happened without Dole’s leadership.

Dole concluded his remarks this way when the memorial was dedicated on May 29, 2004: “Certainly the heroes represented by the 4,000 gold stars on the freedom wall need no monument to commemorate their sacrifice. They are known to God and to their fellow soldiers, who will mourn their passing until the day of our own. In their names, we dedicate this place of meditation, and it is in their memory that I ask you to stand, if possible, and join me in a moment of silent tribute to remind us all that at sometime in our life, we have or may be called upon to make a sacrifice for our country to preserve liberty and freedom.”

Osborne noted that Dole returned to Italy in 2015, to visit the area where he was wounded. In February, he showed the same determination to fight stage four lung cancer diagnosis as he did in coming back from his horrible injuries.

“They tried to put me away in Italy, TO,” Dole told Osborne, calling him by his nickname. “I’m not gonna quit. I’m a fighter.”

Osborne also recalled, “Every single time we would talk — and I mean every single time — he’d say, ‘Tell all of our brothers and sisters in Salisbury we miss them, and ol’ Bob is gonna try to get down there some day.’

“In politics, he was a tough man, and he wanted that presented. But there has never been a man who walked the earth who was stronger.”