New Salisbury City Council to be sworn in, discuss apartment addition at The Grand on Julian 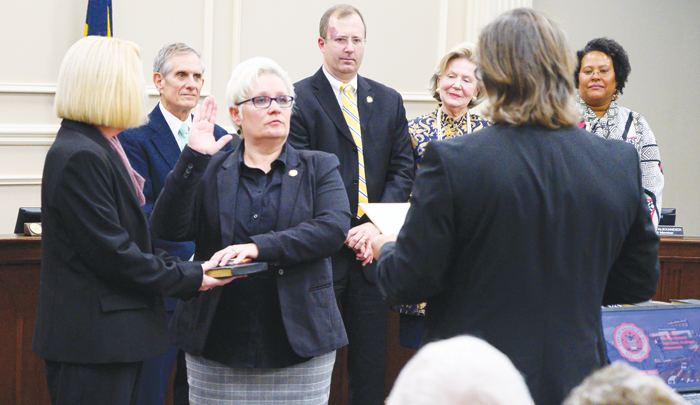 Tamara Sheffield is sworn into another term on the Salisbury City Council in 2019. Sheffield, who will be sworn into a third term, is expected to be named Salisbury's mayor pro tem after the council is sworn in on Tuesday. Josh Bergeron/Salisbury Post

SALISBURY — Newly elected members of the Salisbury City Council will formally be sworn in Tuesday before discussing a second phase of construction at The Grand on Julian Road to provide 212 new apartment units.

While members of council and their families will meet in the council chambers Tuesday, the meeting will still be held virtually beginning at 6 p.m. It will be streamed live at salisburync.gov/webcast and on the city’s Twitter and Facebook accounts. Anyone who wishes to speak during the public comment period must sign up no later than 5 p.m. today by contacting City Clerk Kelly Baker at kbake@salisburync.gov or 704-638-5233.

The current council will call the meeting to order before recognizing visitors and adjourning. New members will be sworn in and administered their oaths before selecting the mayor pro tem. New members of the council told the Post they anticipate naming incumbent Tamara Sheffield the next mayor pro tem.

Later in the meeting, council members will consider land development map amendment CD-06-2021 to rezone one parcel measuring about 12.84 acres at 1040 Julian Road from Rural Residential to Residential Mixed-Use. The request includes a conditional district overlay to allow for a 212-unit multi-family apartment complex known as phase two of The Grand on Julian Road, which was completed and opened in 2009. The Salisbury Planning Board on Nov. 10 approved the request to construct eight three-story apartment buildings comprising 42 one-bedroom units, 110 two-bedroom units and 60 three-bedroom units.

In other items on the agenda:

• Council members will consider awarding a $533,925 contract to NJR Group, Inc., based in Stanly County, to pave city streets between Jan. 4 and May 31. The bid includes S9-5B asphalt to resurface streets, the raising of 120 manhole covers and valve boxes and the milling of 9,500 total square yards. Funds are included in the 2021-22 budget for this project.

• Council will consider granting preliminary approval to the issuance of multi-family housing revenue bonds for Ford City Motor Lofts. The Osceola County Council on Aging, Inc. in partnership with Mid Atlantic Foundation, Cadence Development and Brock Ventures, Inc. is seeking to redevelop 419 S. Main Street into 64 units of multi-generational mixed-income housing. The project would involve both new construction and rehabilitation of existing structures. Financing for the approximately $15 million project is needed from multiple sources, including an already secured Section 202 grant from the U.S. Department of Housing and Urban Development. To secure an additional financing source, the development team is requesting the City Council pass a resolution of support for the project and agree to be the issuer of bonds on behalf of the North Carolina Housing Finance Agency should their application be accepted.

• Council will consider issuing a demolition permit for the R. B. Miller building located at 317 East Liberty St. and within the Downtown Local Historic District. The demolition was approved by the Historic Preservation Commission during the Nov. 10 meeting. The request is from Gray Stout, an architect in Charlotte who is working with Rowan Helping Ministries to provide 12 additional housing units. Stout’s request is to demolish one of two buildings located at 317 E. Liberty St. and construct a new one that will provide transitional housing with a current address of 0 Depot St. Stout plans to demolish the historic R. B. Miller building, but preserve the facade, awnings and wooden deck that faces the Salisbury Depot railroad tracks.

• Council will consider an amendment to the 2021-22 budget in the amount of $15,000 to appropriate a donation for demolition of dilapidated structures in the West End.

• Council will consider a resolution granting a variance to Section 22-73(a) of the City Code for a third driveway connection with fewer than 25 feet of curb between the driveway entrances for 511 Riviera Drive.

• Members will consider authorizing City Manager Lane Bailey to execute a municipal agreement for 30% participation in the construction of pedestrian facilities along Julian Road as part of Project U-5738, a widening project recommended by the Cabarrus-Rowan Metropolitan Planning Organization.

• Council will consider a resolution to transfer Market Station Drive, located between Innes Street and Bendix Drive, from the state secondary road system to the city of Salisbury road system.

• Council will consider a right-of-way use permit for the use of two parking spaces adjacent to 115 East Innes Street through Jan. 31, 2022, for interior renovations.

• Council members will consider adopting the 2022 regular meeting schedule for the year.

• Mayor Karen Alexander will declare the month of December to be National Impaired Driving Prevention Month.