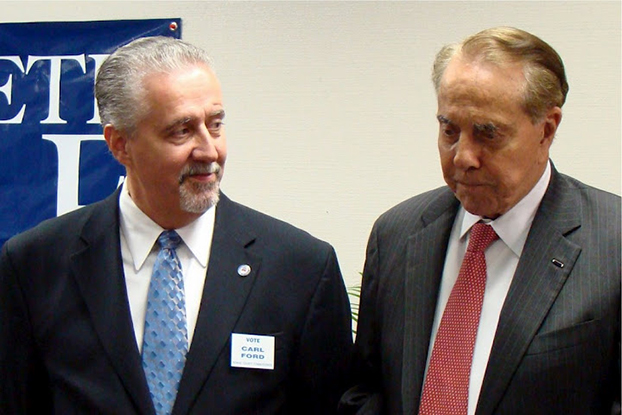 SALISBURY — In the seemingly “long-gone” era of comprise in American politics, elected officials praised presidential candidate and former Kansas senator Bob Dole for his patriotism and pragmatic conservatism throughout his decades of service.

On Sunday, Bob Dole, husband to Salisbury’s Elizabeth “Liddy” Dole, a Republican North Carolina state senator who made her own bid for presidency in 2000, died at the age of 98 after battling stage four lung cancer announced earlier this year.

Bob Dole was first elected to Congress to represent a western Kansas district in 1960 and was elected to the U.S. Senate eight years later. He would later serve as the majority and minority leader throughout the 1980s and ’90s until his presidential run in 1996.

Before elected office, Dole was a young Army platoon leader during World War II, where he’d suffer an injury from a shell fragment that crushed two vertebrae and paralyzed his arms and legs. He spent the latter years of his life supporting wounded veterans and the memory of WWII vets. In September 2017, Dole was granted the Congressional Gold Medal a decade after receiving the Presidential Medal of Freedom.

During his time of service, he became known for his talent for compromise and “sharp-tongued” wit, and North Carolina elected officials remember him for such talent.

Salisbury Mayor Karen Alexander said she always looked up to Bob Dole as a war hero and is inspired that he used his own disabilities from the war to push for the Americans with Disability Act that benefitted so many Americans. The ADA was passed in 1990 near the beginning of Alexander’s career as an architect, so she saw the impact such legislation made.

Alexander is also inspired by his support of Elizabeth Dole’s political ambitions when “maybe it wasn’t so fashionable” to do at the time, she added.

“A statesman like Senator Dole is certainly a complex icon and totally unforgettable,” Alexander said.

Rep. Harry Warren said he was saddened to hear of Dole’s passing, who he called “a true patriot” who took pride in public service to the U.S.

“His death marks the passage of an era of statesmanship that we no longer seem to have on the political scene today,” Warren said.

U.S. Sen. Thom Tillis, a Republican representing North Carolina, said Bob Dole was a man who never stopped serving even after retirement, praising his partnership with Elizabeth Dole to “remain a tireless champion for our veterans.”

“America has sadly lost one of our greatest heroes. From nearly losing his own life fighting against fascists in World War II to dedicating his civilian life to producing results for the American people in the halls of Congress, Bob Dole personified what it meant to be a selfless servant leader,” Tillis said. “In the Senate, he used his leadership positions to break gridlock and find common ground for a better America. Over the years, his friends, colleagues and many Americans had the opportunity to see his big heart and appreciate his legendary sense of humor.”

Tillis said throughout his life of service, Dole remained a “rare voice of reason and civility in an age of partisan politics.”

“Sen. Dole’s courageous sacrifice in WWII was just the start of a life defined by service to our veterans and his fellow Americans,” said Rep. Ted Budd, a Republican seeking election to the U.S. Senate. “He will be greatly missed.”

State Sen. Carl Ford, a Republican representing Rowan and Stanly counties, recalls meeting Bob in Rowan County in 2008. Ford was formerly a county commissioner and chairman of the county commission.

“It’s a sad day for our country to lose this man of honor and service,” Ford told the Post. “He was a very knowledgeable and pleasant man. God bless the Dole family.”

Sen. Richard Burr, a Republican who is retiring from the U.S. Senate in 2022, said Bob Dole’s leadership will be remembered for years to come.

“As part of the Greatest Generation, Sen. Dole overcame immense challenges after being injured on the battlefield, leaving him more determined to continue serving his country in Congress,” Burr said. “For nearly 36 years, Sen. Dole was a tireless champion for others, working on issues that embody American values, including the passage of the landmark Americans with Disabilities Act.”

President Joe Biden on Sunday credited Bob Dole with a man admired by Americans. Following Bob Dole’s announcement of cancer in February, Biden visited Bob Dole to wish him well as the two were close friends from their days in the Senate, the White House reports.

“He had an unerring sense of integrity and honor,” Biden said in a statement. “May God bless him, and may our nation draw upon his legacy of decency, dignity, good humor and patriotism for all time.”

Former President Donald Trump, whom Bob Dole endorsed in 2016 after supporting former candidate Jeb Bush in the primary, also credited Bob Dole with being an American war hero and true patriot who made the Republican party stronger with his service.