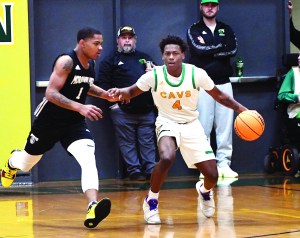 “Parkland is talented and scrappy, but some of their best guys are young,” North head coach Jason Causby said. “There were an awful lot of loose balls tonight, a lot of plays where we had to  overcome their scrappiness.”

Quashawn Carpenter made four of those 3s and scored 17. Amir Alexander made two 3-pointers and scored 16. Naejone Whitney scored 14.

North broke the game open against the Mustangs (0-3) with a second-quarter flurry and led 42-20 at halftime.

“Parkland is as athletic as us, maybe more athletic,” Causby said. “But we were able to dictate pace. There were times  when it got helter-skelter, but we kept our composure and played under control. We were pretty steady throughout.”

On Wednesday, North will take on West Rowan in Spencer, always a big county matchup, but especially with West (1-2) coming off a big home win against Salisbury.