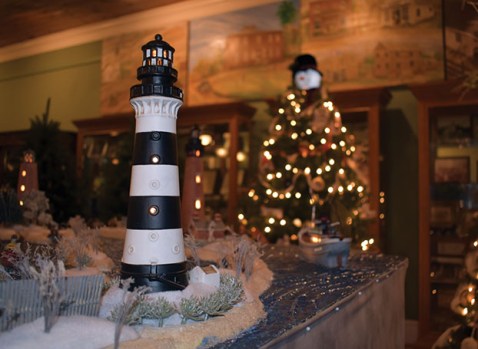 The Bodie Island Lighthouse is one of seven represented in this year's Christmas village display at the Rockwell Museum. The display also highlights more local landmarks, including the Old Stone House and Dunn's Mountain. Ben Stansell/Salisbury Post 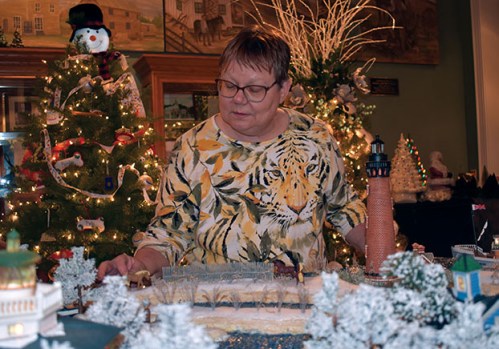 Mallory Allen tidies up a wild horse stationed by the Carrituck Lighthouse. Allen dedicates about 300 hours of time every year to put together the intricate Christmas display. Ben Stansell/Salisbury Post 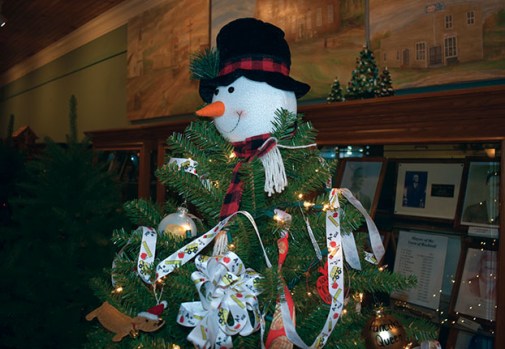 There are 10 Christmas trees surrounding the village display. Each tree is decorated differently by a local organization, business or individual. Ben Stansell/Salisbury Post 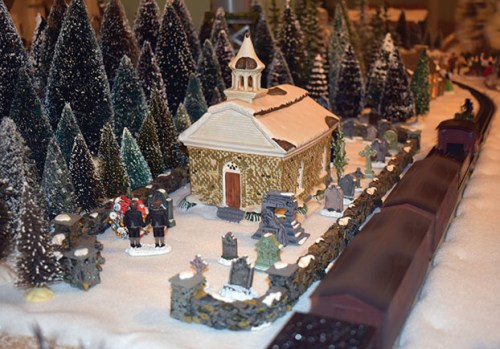 A train rushes by a model of Grace Lower Stone Church, which is located in Rockwell and is one of the state's oldest churches. Ben Stansell/Salisbury Post

All these iconic North Carolina and local scenes have been meticulously recreated in miniature in the Rockwell Museum. The display is part of the museum’s annual Festival of Trees and Christmas Village, which will be available for viewing from now until Dec. 23. The museum, located at 111 E. Main St., is open Monday through Friday from 6-8 p.m., Saturday from 1-4 p.m. and 6-8 p.m. and Sunday from 1-4 p.m.

The last indoor Christmas village was hosted in 2019 and was themed “Alpine Express.” Amid the uncertainty of COVID-19 last year, the Rockwell Museum did not have a display inside. Instead, it stationed villages in its front windows.

Curating the Christmas display is a yearly tradition for Mallory Allen, known in Rockwell as “the village lady.” The annual exercise began over a decade ago and has become an all-consuming project that she looks forward to completing each fall. Allen has long collected villages and placed them in her home, but showing off her skills to hundreds each December is an entirely different thrill.

“If I do it at home, a handful of people see it,” Allen said. “Here, about 300 people see it. So, it’s a good thing for the community and for the museum.”

The village is a different theme every year, brought to life through 300 hours of hard work split over several weeks of used vacation time. Allen, who has worked in information technology for most of her career, relies on her educational background as an architectural historian to research and refine each theme. She keeps a running list of possible ideas at all times.

The goal, she said, is to perfectly balance a blend of historical accuracy and holiday whimsy. Past themes include New England Fantasy and a German Christmas market. The displays are primarily composed of pieces Allen has collected over the years, or a few new buildings she buys to fit her specific subject matter.

Almost all of the villages have featured landmarks recognizable to many, but perhaps none have highlighted as many North Carolina staples as this year’s “Snowing in the Pines  — A Carolina Christmas” theme.

When visitors first walk in the museum’s doors, they’ll be greeted by seven lighthouses that dot the North Carolina coast. Bodie Island Lighthouse stands proudly in the middle with its horizontal black stripes, surrounded on both sides by lighthouses from Cape Henry, Currituck, Cape Hatteras, Ocracoke Island, Cape Lookout and Bald Head Island. The Corolla wild horses trot underneath the Currituck lighthouse. All of the lighthouses are made by the Lefton Company.

Every year’s village contains specific challenges, Allen said. A few years ago, it was elevating many train tracks in the “Alpine Express” village. Nothing was more difficult this year than creating an ocean landscape with the right texture and color. The blue expanse surrounding the lighthouses is composed primarily of wood glue and tissue. It was painstaking to put together, Allen said.

Beyond the lighthouse, the village morphs into Christmas scenes from across North Carolina knit together in a comprehensive layout. Grapes grow in a snow-covered field next to an old plantation home. Golfers finish a hole in front of a country club. Grace Lower Stone Church, which is one of the state’s oldest and happens to be located in Rockwell, stands proudly near a forest. Not far from it is the Old Stone House. Around the back of the display snakes Dunn’s Mountain and on the other side is early Kannapolis centered around Cannon Mills. Weaving throughout the village is a Bachmann On30 freight train.

Allen has been developing the idea for “Snowing in the Pines — A Carolina Christmas” for years, but the physical labor began at her home in September. With help from her husband Walt, Allen formed the underlying template for the village first and then added most of the pieces once it was placed in the museum.

While the centerpiece inside the museum is made up of Allen’s collected pieces, the festive villages displayed in the windows of the building are composed of pieces owned by the late Barbara Young, who was well known in the Rockwell community. The wife of retired pastor Bob Young died in March 2020.

“These two windows are her collection in her memory,” Allen said.

Surrounding the Christmas village are 10 trees wrapped distinctly with ornaments and tinsel. Each tree has been decorated by a local civic organization, business or individual.

For the first time since the festival of trees tradition started more than a decade ago, Rockwell Museum is using artificial trees. The switch was made, Allen said, because real trees are expensive, difficult to procure and create more of a mess to clean up. Plus, the artificial trees will be used by the museum for years to come, Allen said.

More information about the Festival of Trees and Christmas Village can be found by calling Rockwell Town Hall at 704-279-2180. Rockwell Museum is willing to arrange group visits for those interested in perusing the display when it is not normally open.