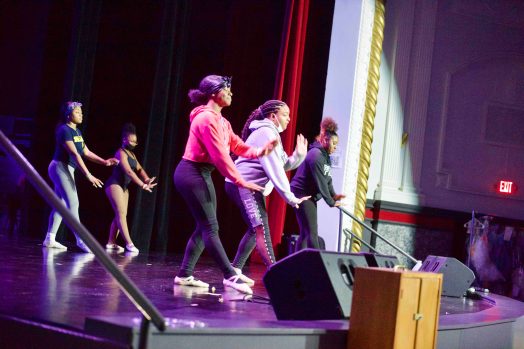 Carl Blankenship/Salisbury Post - The production has about 100 dancers this year. 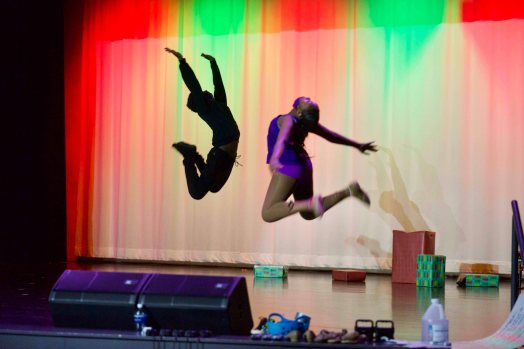 Carl Blankenship/ Salisbury Post - Zymier Myers, a nutcracker, and Shiloh Ricks, mouse king, rehearse for The Nutcracker. Last year's production was an abbreviated version of the ballet that was recorded and shown virtually, but this year it has been expanded. 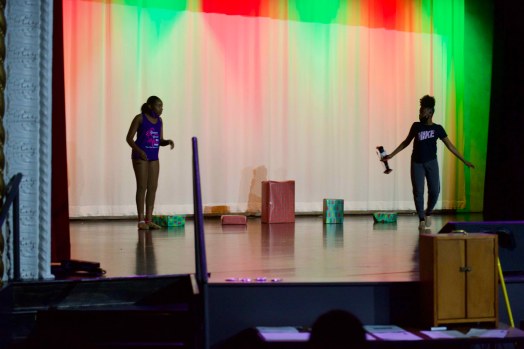 Carl Blankenship/Salisbury Post - Carmen Torrence, who plays Clara, and Shiloh Ricks playing the Mouse King during rehearsal. The program is creating a costume closet to cover to fit every dancer in every role as students take on different roles each year.

SALISBURY – All grade levels are coming together for a production of the most well-known ballet in the world.

The Nutcracker is a Christmas staple for symphonies and ballet companies worldwide. Salisbury High School got its first taste of the classic last year when dance students recorded a pared-down version for a remote showing.

This year, the show is back as a community affair, pooling talent from elementary students and other high school in town as well as the local troupe Triple Threat Dance and Charm. Younger kids are involved, too; the little mice are all being played by kids ages 2 to 5.

The show is in person and selling tickets fast for showings this Sunday and the next.

SHS dance teacher and Triple Threat founder Krystal Stukes said about 100 dancers are in the show and her goal is to keep kids involved as they grow older.

Judah-Leigh Grace Foley, a second grader at Isenberg and Triple Threat member, said it was always her dream to dance and this is her fist big performance as part of the troupe. Foley is a gingerbread cookie this year and said she wants to keep being part of the show, working her way up to play a honey bee.

Malaiah Everhart, a seventh grader at Knox and another Triple Threat dancer, started dancing when she was 7 years old. She has stuck with it because she enjoys dancing and is grateful she gets to do it.

Everhart is excited for the show. Performing does not scare her, but her first ballet show makes her a bit nervous.

“You’ve just got to focus more on your technique,” Everhart said.

Everhart dances in two roles: a flower and a party girl.

Stukes said most kids knew very little about the ballet before they started working on the show. She said when she played “Dance of the Sugar Plum Fairy” for students, their first identification was an M&Ms commercial.

Stukes has made a point of teaching her students more about the show, including ballet terms and how to pronounce composer Pyotr Ilyich Tchaikovsky’s name. She said the students got more into the ballet the more they learned about it.

“We’ve been studying ‘The Nutcracker’ and ballet all semester,” Stukes said, adding younger kids were selected in partnership with Communities In Schools from Isenberg, Hurley Elementary and Knox Middle School.

The goal is to build on the show year-after-year. Stukes said the production is stockpiling a costume closet to house every variation the production may need and for other dancers as they move through different roles. All the proceeds from the show go to high school dance programs.

Stukes said the goal is to expose students to the performing arts and bring the community together for the holidays.

“Children are the ones that bring the greatest joy out of anybody,” Stukes said, adding the kids are excited every time she turns the lights on.

The event is sponsored by Triple Threat and Rowan Arts Council. Tickets can be purchased at the door if they’re available.

The school’s band will play some holiday tunes after doors open at 4 p.m. on Sunday.