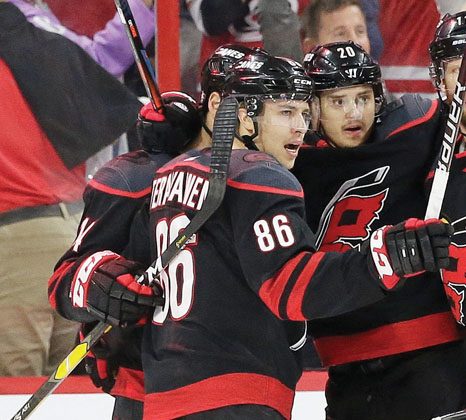 RALEIGH (AP) — Teuvo Teravainen scored two goals and the Carolina Hurricanes rode an early burst of offense to a 6-2 win over the Buffalo Sabres on Saturday night.

Martin Necas, Ian Cole, Vincent Trocheck and Nino Niederreiter also scored for the Hurricanes, who snapped a season-worst three-game losing streak for only their second win in the last seven games.

Henri Jokiharju scored his first goal of the season and Zemgus Girgensons also had a goal for the Sabres, who’ve lost four in a row and eight of their last nine. They’ve allowed 20 goals in a three-game span.

Goalie Malcolm Subban, making his Sabres debut after a trade Thursday with Chicago, played his first NHL game of the season and stopped 19 shots before departing midway through the third period with an injury.

Teravainen scored just 2:16 into the game. Later in the period, Necas scored on a wrap-around. A goal was waved off initially, but through video review it was determined that the puck cross the line before it was pushed out by Subban.

Buffalo got on the board with 32 seconds left in the opening period when Jokiharju was credited with a goal, though the puck went in off Carolina’s Cole.

Carolina has won its last 11 meetings with the Sabres.

Andrei Svechnikov, the second-leading scorer for the Hurricanes, sat out with an upper-body injury. He had a goal in two of the last four games, including Thursday night’s loss to Ottawa.

Svechnikov missed a game for the first time this season. So did Jordan Martinook, who left the Ottawa game with an injury and didn’t play Saturday.

The good news for Carolina is that defenseman Ethan Bear returned after a six-game absence due to being in the COVID-19 protocol.

For Buffalo, defenseman Robert Hagg was out of the lineup for the first time this season. Will Butcher played for just the second time in seven games.

Hurricanes: At Winnipeg on Tuesday night to begin a five-game trip. ___