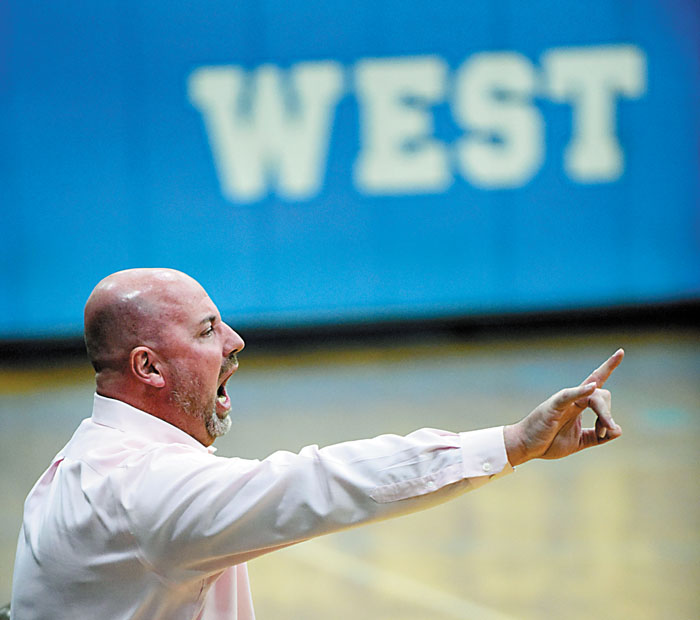 The host Falcons scored the game’s first 10 points, led by as many as 24 and easily outscored Salisbury, 66-55, for their first non-conference victory.

“You can’t win a championship in early December,” raspy-voiced coach Mike Gurley said after securing his 440th career win at West. “But if we’re going to win a championship in February, we’ve got to start working and taking the steps necessary. We’re starting to play with the effort and teamwork it will take to be a good team.”

West (1-2) took an important one by surprising Salisbury, springing its roster of coming attractions on the unsuspecting Hornets (2-3). Each team placed three scorers in double figures, topped by the 22 points West sophomore William Givens poured in. SHS was paced by Juke Harris’ 17 and senior Cam Stout’s 16 second-half points.

“I’ll take 100 percent of the blame on this because my guys aren’t prepared right now,” said losing coach Bryan Withers. “We’re not prepared to play. We have too many offensive weapons to score 14 points and make only five baskets in the first half, but we stopped ourselves. We’re not taking our time and shooting the ball. We’re rushing everything — and I don’t think that’s us. I’ve got to start calling more plays so we can get to where we want.”

West’s tire-screeching start took just 2:18 and thrilled at least half of the sellout crowd. It started just five seconds in, when Givens — a 6-foot shooting guard with an accurate mid-range jumper — buried a 3-pointer from deep in the left corner. “My point guard (sophomore Kayvone Norman) got it to me and I knocked down the shot. It probably frustrated them right away.”

Bryson Cowan’s layup and an acrobatic, down-the-lane floater by Elijah Holmes upped the lead to 7-0 before a banked-in 3-ball by 6-7 sophomore Levon Jacobs provided a double-digit lead.

“I think it shocked us,” said Gurley. “We were down 15-2 last night (in a second consecutive loss to Mooresville), so seeing it flipped was kind of exciting. But like I told them, we’re three minutes in with 29 minutes to go. We’re learning to play with a lead — and you saw some of that tonight.”

The Hornets continued their hyperkinetic style of play in the second half and procured better results. After trailing by as much as 40-16 following Cowan’s third-period lay-in, Salisbury closed the quarter on an 18-8 run. Stout connected from three-point range three times, including a missile from the left wing at the buzzer that trimmed the deficit to 48-35.

“They handled our pressure for a while,” Withers said. “Then we got after them a little bit and made them turn it over, but we couldn’t finish. When we got it down to nine, we’d miss a layup here or an open shot there. What we’re bad at right now is boxing out and rebounding. Teams are killing us off the glass. That’s something we have to correct by being tougher.”

Salisbury guard Mike Geter hit three straight baskets in the fourth quarter, cutting the Falcons’ lead to 54-45 with 4:22 remaining. West wrestled back the momentum on another Jacobs three-pointer in the waning seconds and converted nine of 12 free throws down the stretch.

“We were one. We were together,” Jacobs said after netting 14 points. “It all comes down to communication. We’re learning and getting better. At this point, there’s no telling how good we can be.”

“It’s like watching your 7-year-old become a 12-year-old,” he smiled. “And your 12-year-old becoming a 21-year-old. You see them developing. I don’t know where we’re at right now, but we know we’ll be growing all season. With a team this young, every game, it’ll be the first time for something. That was their first big Friday night.”

NOTES: Salisbury, playing its fifth game in seven days, had only two turnovers in the second half and 10 altogether. … Harris, a transfer from West who served as a sixth man for last season’s NPC tournament champions, made the game’s most exciting play when he flushed a one-handed jam late in the second quarter. He previously had been whistled for a technical and fouled out with 9.6 seconds to play. …. Geter scored six of his 13 points in the final stanza. … West finished with six 3-pointers — four by Givens and two by Jacobs. The Falcons sank 25 of 34 free throws. … SHS plays its first home game Wednesday when Corvian Community visits from Charlotte. West goes to Carson on Tuesday, North Rowan on Wednesday and South Rowan next Friday.