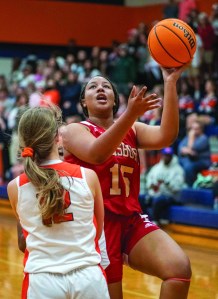 Mitchell specializes in defense. All the Salisbury girls were defensive specialists in the second half on Friday in Mount Ulla.

West Rowan was held to 13 points after halftime. Salisbury pulled away for a 59-34 victory.

It was a lot tougher than the final score sounds. It was a fight, with no uncontested rebounds. But the Hornets won by knockout in the fourth quarter.

“We turned up the defense in the second half,” junior guard Kyla Bryant said. “We played with energy, but at the same time, we were disciplined. And we got a lot more rebounds.”

The Salisbury girls tackled a brutal schedule the first two weeks of this season.

Five games, none at home, all against perennially strong teams. The Hornets boosted their record to 4-1 by winning at West (2-1). They lost to 4A Apex Friendship, which has one of the nation’s best players.

“Maybe as tough a schedule as anyone has played to start a season,” Salisbury head coach Lakai Brice said. “But we did it for a reason. We needed to see where we stood and see what we needed to fix.”

Not much needs fixing. The Hornets need to make more free throws and more layups, but that’s probably true for every team. They’ve got close to a perfect blend of guards and bigs, of shooters and defenders. They’ll get even better once they get shot-blocker Haley Dalton healthy.

“The pieces are all there,” senior Rachel McCullough said. “We’ve got the ability and the chemistry.”

Bryant and McCullough carried the Hornets in a fierce first half. McCullough was raining 3s, but the Falcons, basically a team of sophomores who were facing the experienced Hornets for the first time in an official game, weren’t backing down, even with standout point guard De’Mya Phifer saddled with three early personal fouls.

Makaylah Tenor made 3-pointers for West at the start of the game and near the end of the half to spark her team.

The Hornets needed a stickback by Bryant to take a 26-21 lead to the locker room.

West had to feel pretty good. Phifer is their ballhandler and is often their leading scorer. She’d barely played and they’d missed an incredible number of free throws, but they were only down five.

In the other locker room, Brice was reminding the Hornets that they were a team with a lot of good players, not just two.

Brice also was telling them they had to match West’s intensity on the glass and on loose balls.

“West Rowan is a scrappy team, very tough players,” Salisbury junior forward Jamecia Huntley said. “We needed to scrap as hard as they were.”

Huntley has made her mark as a running, jumping athlete, not as a shooter. But she’s worked on her shooting range in the offseason. West gave her space, as the scouting report says to do, but Huntley drilled two bombs in a row. The Hornets finally achieved some separation early in the third quarter at 35-25.

The Hornets took a 38-29 lead to the fourth quarter, still a tough, tight game, but not for much longer.

It was 38-30 when Mary Morgan made one of the key plays, fighting for an offensive rebound and sticking it in as she was fouled. She hit the free throw for 41-30.

“Mary is defense-first, but she makes those plays when we need them,” Brice said. “Always the glue for us.”

Then Brice was on her feet, yelling for the Hornets to finish West off, and the foul-plagued Falcons, frustrated by the Hornets’ halfcourt defense, couldn’t do much to stop them.

Huntley got the next three. Then Bryant scooped in a layup for a 50-30 lead with three minutes left, and it was over.

Salisbury outscored the Falcons 33-13 in the second half; 21-5 in the fourth quarter.

Lauren Arnold was solid throughout and led the Falcons with 14 points. Dede Cuthbertson and Tenor were next with six each.

Emma Clarke, a mobile 6-footer who provides all of West’s height, was tough on the boards, but couldn’t get anything to fall.

“I was disappointed in our effort, at times,” West head coach Ashley Poole said. “But the only way this game hurt us is if we don’t learn from it.”

Bryant led Salisbury with 21. McCullough got her 13 in the first half. Huntley delivered 10 of her 11 after halftime.

Bryant has been struggling with a sore wrist in the early going, but she’s playing through the pain. This was her biggest game so far.

The Hornets have needed her. That early schedule — North Surry and Apex Friendship in a tip-off tournament, at Carson, at Northwest Guilford, at West Rowan — was no picnic.

“That schedule made us stronger,” Bryant said. “We’ve had to make adjustments.”

Salisbury will finally get to play at home next Wednesday.