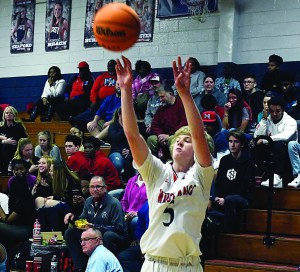 GRANITE QUARRY — Dylan Valley was in an emergency room with a scratched cornea on Tuesday.

He was on the East Rowan bench wearing shades to protect his injured eye on Wednesday.

On Friday, the junior guard who is one of the county’s best shooters, was back on the court with vision sound enough to score 24 points. He sparked East’s boys basketball team to a 69-48 win over West Davidson.

“Dylan got poked in the eye very early in Tuesday’s game, and it was scary moment for him and our team,” East head coach Andrew Porter said. “He means a lot to us. Not just the 3-pointers, but the ballhandling and the defense.”

While Valley showed plenty of resilience, so did his teammates.

The Mustangs really needed a win Friday in a game they were supposed to win. They got it.

“It’s just really good for our kids to get that first one,” Porter said. “We played hard and battled to the end in all three losses, but we just didn’t win. We needed a win tonight for our confidence. Winning gives you a good feeling.”

“We took command from the start,” Porter said.

The 6-foot-6 junior made an impact. His 15 points and 17 rebounds complemented Valley’s 3-pointers and were helpful in battering the 2A Green Dragons (0-4).

Point guard Kilighia Ellis has stepped forward as a capable third scorer for the Mustangs and had 10 points. He’s averaging 12.5 per game.

Clement, who didn’t play much last season, had one heck of a three-game week. Responding to a boost in minutes with Valley sidelined, he contributed 26 points.