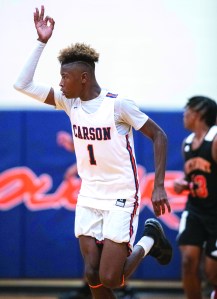 CHINA GROVE  — Carson’s boys basketball team fell to 0-4 on Friday with a 55-48 home loss to Statesville.

Another setback, but mostly a positive one for the Cougars, who took on three athletic teams in non-conference games this week.

“Played a little better tonight, handled it better, defended a little better,” said head coach Brian Perry, who is in his 16th season at the helm of the Cougars. “And we’re getting healthier. We had more bodies tonight.”

Most of the Carson scoring came from Jay Howard, who matched his career-best with 18 points, and Emory Taylor who made a couple of 3-pointers and scored 13.

Camerson Burleyson had nine to finish off a week in which he scored 38 points. He missed all of last season as he recovered from “Tommy John” elbow surgery.

Corbin Hales, promoted from the jayvees when the Cougars had several players out, added five points.

An experienced Statesville team (1-0) got 19 points from Christian Moore and 14 each from Torrey Miller and Messiah Robinson.