High school basketball: An easy one for Carson girls 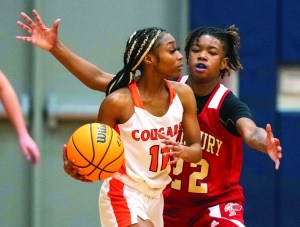 CHINA GROVE — Carson’s girls basketball team had a lot of things to work on following a ragged, hang-on-for-dear-life win against West Cabarrus.

The Cougars went out and executed in a 63-23 rout of Statesville on Friday.

Carson led 27-6 at halftime and triggered a running clock by taking a 40-point lead in the second half.

“We got back to basics, and it was a very good effort,” winning head coach Brooke Stouder said. “Defensively, we played a much cleaner game. We kept them in front of us, boxed out and got the rebound. Offensively, we shared it, we moved it, we found the open person.”

Catawba signee Mary Spry enjoyed another dominant game for the Cougars with 24 efficient points to match her career high. She was 9-for-14 from the floor, including 2-for-2 from 3-point range. She was 4-for-4 at the foul line and added 11 rebounds for a double-double.

Aliayah White had a career-best 12 points for the Cougars (3-1). She made three 3-pointers and chased down six rebounds.”

“This was much better,” Stouder said. “We played a lot more composed and made better decisions.”