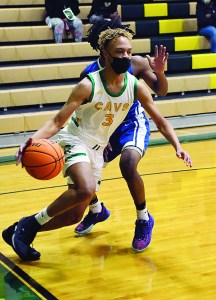 LANDIS — North Rowan’s boys suited up 13 on Thursday, and there was nothing unlucky about it.

“We played hard again and we shot it a lot better than we did against East Rowan on Wednesday,” North head coach Jason Causby said. “We got some of our football guys like Kemon O’Kelly and Jae’mias Morrow going a little bit.”

The Cavaliers (4-0) are off to a strong start and have won against three county opponents.

The victory was the 231st as a Rowan County head boys basketball coach for Causby. That tied him for fifth place on the county’s all-time list with the late Walt Baker, North’s first head coach and a Salisbury-Rowan Hall of Famer.  Ahead of Causby are four more Hall of Famers — Bob Pharr (252), Sam Gealy (266), Bob Hundley (274) and Mike Gurley (439).

North had a second-quarter spurt to grab a 39-23 halftime lead.

North’s depth wore out the Raiders in the third quarter, a period in which the Cavaliers outscored the home team 24-6.

“We went way too long without scoring in the third quarter,” South head coach Daniel Blevins said. “It did not go well.”

Sophomore Amir Alexander scored 13 and accounted for half of North’s six 3-pointers.

“George played his best game,” Causby said. “So did Pharrell Hailey. Hailey’s rebounding has been a key to our good start.”

Quashawn Carpenter, often North’s scoring leader, only scored two points. He and Amari McArthur (four points) didn’t have to play a lot, and they watched some reserves shine.

North didn’t shoot free throws well. Other than that, it was a solid performance.

“We were really unselfish,” Causby said. “Anytime everyone scores, it’s a good night.”