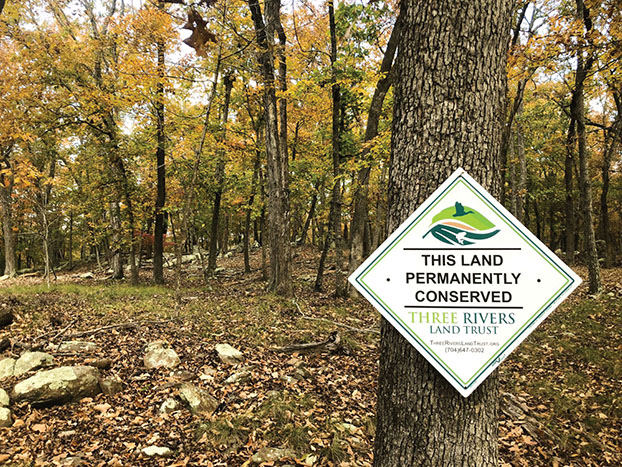 SALISBURY — Three Rivers Land Trust will protect 5,381 acres of natural land and family farms across the Piedmont after receiving a record increase in funding from the state.

Based in Salisbury, Three Rivers Land Trust works to conserve land in a 15-county footprint stretching from Iredell to Cumberland County. It has received $9.7 million from two state funds that will allow it to move forward with conserving 19 properties. Three Rivers applied for the funding by submitting applications for each project.

Through the North Carolina Land and Water Fund, $6.45 million has been awarded to Three Rivers to protect 11 properties totaling 2,701 acres. The properties include natural areas on High Rock Lake in Davidson County, Drowning Creek and the Deep River in Moore County, the Little River and Barnes Creek in Montgomery County, the Rocky River in Cabarrus County and one tract in Stanly County.

“We had a lot of happy landowners, a lot of people who are just really thankful that we are able to partner with them to do this,” Three Rivers Land Trust Associate Director Crystal Cockman said. “One of my farmers said her heart was lifted to the sky. It makes a big difference to a lot of people.” 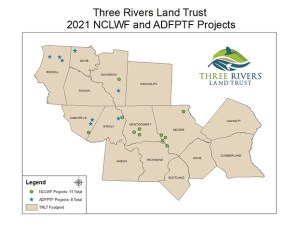 This map shows the locations of conservation projects being executed by the Three Rivers Land Trust that recently received funding from the state. Map submitted.

Many farmers, Cockman said, partner with Three Rivers as a way to both continue farming and preserve the land for future generations. Three Rivers Land Trust Executive Director Travis Morehead said the organization has a waiting list of farmers representing 6,000 acres who are interested in preserving their land.

“This is a landmark year for conservation in North Carolina,” Morehead said in a news release. “We submitted our best projects for consideration. Thanks to a generous allocation by the Governor and General Assembly, both the NCLWF and ADFPTF were able to fund these important local conservation projects.”

Morehead said that both the Land and Water Fund and Agricultural Development and Farmland Preservation Trust Fund will be bolstered with higher-than-normal funding next year as well, meaning there are additional opportunities for organizations like his to complete conservation projects.

“It’s a great budget for conservation these two years,” Morehead said. “It’s fantastic. Great projects are being done across the state.”

The increased funding, Cockman said, will allow Three Rivers to complete projects it has been working on for several years.

“Many of these projects have been on our radar for a number of years, and thankfully this year the funds are there to assist with the protection of all these incredible lands,” Cockman said.

All money awarded to Three Rivers will go directly into the purchase of properties and easements, which will protect them in perpetuity. With funding in hand, the next step is for Three Rivers Land Trust to work through the paperwork, site appraisals and surveys needed to finalize the conservation projects. There will be no shortage of work for the organization’s staff.

“We were excited, but at the same time we caught a tiger by the tail,” Morehead said. “We’re going to do a little internal ramping up to make sure we can meet our obligations on these to make sure these projects get done.”

In addition to the 19 projects, Three Rivers Land Trust will continue to work on other conservation efforts throughout the year. That includes donated conservation easements from landowners who want to protect their property in perpetuity.

Along with state funding, Three Rivers relies on private donations. For every dollar donated toward operational funding, Morehead said, staff has been able to leverage $13 into local project funds.

More information about Three Rivers Land Trust can be found online at trlt.org. Those interested in finding out more about conserving their land can contact Cockman at 704-647-0302 or crystal@threeriverslandtrust.org.