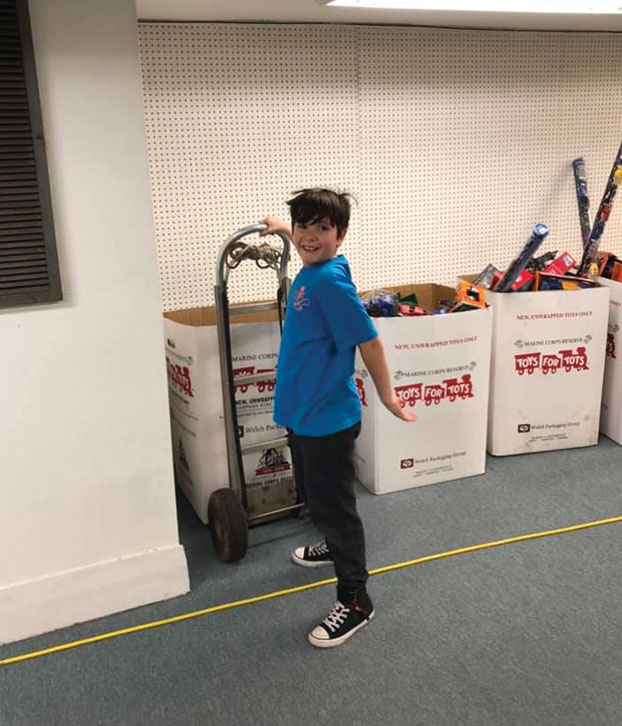 Aidan Melton will be hosting a toy drive at Sonic Drive-In to collect gifts for Toys for Tots. The 12-year-old has been gatherring donated toys for the past seven years. Ben Stansell/Salisbury Post

SALISBURY — To bring in donations for Toys for Tots this year, Aidan Melton is relying on help from an old friend.

Started in 1947 by a Marine Corps reservist, Toys for Tots is a nationwide program led by the U.S. Marine Corps to distribute donated toys to families who can not afford Christmas gifts. Last year, Salisbury’s Toys for Tots Foundation distributed 9,879 toys to support 1,369 children in Rowan County.

Melton, now 12, has continued to amass action figures, board games and bicycles every holiday season, donating thousands of gifts to Toys for Tots.

Melton and Mitchell have joined forces seven years later to gather gifts once again. Mitchell, now a district manager overseeing five Sonic Drive-Ins in the Piedmont, has invited Melton to host a toy drive at the 935 W. Innes St. Sonic on Friday, Saturday and Sunday from 8 a.m. to 6 p.m.

“We’d love to bridge that gap and make sure everybody has something to open on Christmas,” Mitchell said.

Melton will be stationed at the fast food restaurant all three days, stockpiling toys in large bins. With a significant number of households requesting toys this year, Melton said they are hoping to collect “as many toys as we can get.”

Donated toys must be new and unwrapped. No used or unboxed toys will be accepted.

Not only will everyone who donates a toy be doing something positive to impact the life of another, but they will also receive a coupon from Sonic for a free order of tater tots.

Mitchell said a Sonic tater tot mascot will be there for the toy drive. There may be a few other surprises as well.

In lieu of donating toys, someone can also purchase a Sonic Community First Card from Melton for $5, with 100% of the money raised from the cards going to help purchase more toys. All of the toys and money donated to the program will help children in Rowan County.

Mitchell said he would love for the multi-day Toys for Tots drive to be an annual event at the West Innes Street Sonic location.

On the same three days that Melton is collecting toys at Sonic, Raul “Arbe” Arbelaez will be stationed at Krispy Kreme at 1428 W. Innes St. gathering Christmas gifts as well. Arbelaez brought the charitable gift-giving program to Salisbury over a decade ago and has championed its efforts ever since.

Arbelaez will set up shop at Krispy Kreme from 7 a.m. on Friday to 4 p.m. on Sunday, never leaving the donut shop’s parking lot. The roof of the store will also be decorated with holiday accents, but Arbelaez and his crew won’t be staying up there like they have in the past.

Melton and Arbelaez have worked together to provide gifts in Rowan County for several years, and Arbelaez will stop by Sonic during the three days to check in on Melton’s efforts.

For those who can not make it to Sonic or Krispy Kreme, Melton has positioned several toy collection boxes around Salisbury. There are receptacles at Rijk’s Strength and Performance at 105 W. Corriher Ave., the Gateway Building at 204 E Innes St. and at Lee Street Theatre for the duration of “A Christmas Carol,” which runs Dec. 9-19. Melton is a cast member in the production. Acting is Melton’s second love, just behind his charitable enterprises.

More information about Toys for Tots can be found online at salisbury-nc.toysfortots.org.